The debate over school sport reached Prime Minister's Questions today, with Ed Miliband putting David Cameron on the spot over cuts to the school sport budget. The Leader of the Opposition urged Mr Cameron to "overrule" Michael Gove, warning him he "will live to regret" the £162 million abolition of School Sport Partnerships, which have a proven track record of success. 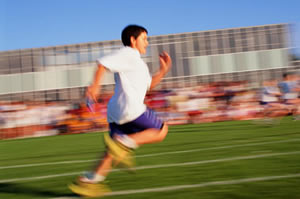 The debate over school sport reached Prime Minister’s Questions today, with Ed Miliband putting David Cameron on the spot over cuts to the school sport budget. The Leader of the Opposition urged Mr Cameron to “overrule” education secretary Michael Gove, warning him he “will live to regret” the £162 million abolition of School Sport Partnerships (SSPs), which have a proven track record of success.

Mr Miliband cited a letter from Jo Phillips, school sports coordinator at Chipping Norton School in the prime minister’s own constituency, who was left “devastated to witness the potential demise of this legacy with the sweep of Mr Gove’s pen”.

Mr Cameron countered by trotting out the usual stats about intra- and inter-school competitive sport, yet, just like his education secretary, failed to put them in the context of previous years and the dire state of affairs pre-97, when only a quarter of pupils enjoyed two hours’ sport a week; the figure is now 95 per cent.

As the table below shows, provision in all other sports and activities rose or stayed constant over the same period: 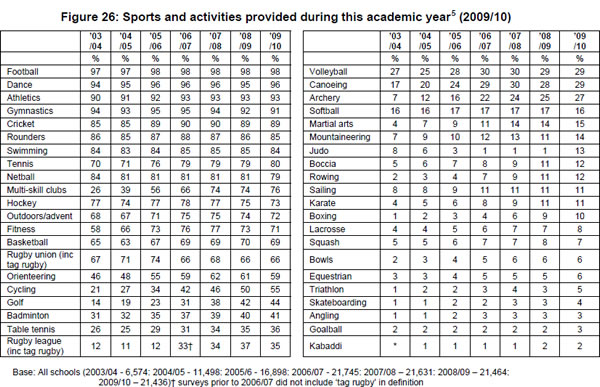 Earlier today, former England Test batsman Ed Smith, writing in the ‘Times 2’ section of this morning’s Times (not available online), joined the chorus of sports stars expressing their disquiet at the cuts. He asked:

“How could such a move make sense with Britain planning to host the Olympics? Surely we want school children to play the sports they will be watching on TV? Why mess about with sports funding when the nation faces an obesity epidemic and everyone, across the board, agrees that our young need to be more active? Above all, why threaten to make the state of sport in our state schools even worse than it already is?”

Smith also pointed out that the cuts may lead to an increase in the chasm in sporting excellence between independent schools and state schools:

“There is obviously a risk that Gove’s approach will lead to a greater divergence of sporting experience in schools. The real beneficiaries of the decline of state school sport were the independent schools. The gap between the sporting haves and have-nots has undeniably widened.

Meanwhile, this evening Toby Helm, writing in The Guardian Politics Blog, says the prime minister “will have to backtrack on school sports”:

“… these are not rich private schools that can afford or have the staff to transport kids by bus to other schools twice a week. Instead in the state sector the SSPs provide sport within schools in the main, with the help of local clubs which lend them their facilities. It is not the day for Cameron to do a U-turn on this. But he is too sensible not to see that Gove has made a big mistake on this, having failed completely to consult within government and among teachers.

“The reason the U-turn will, I think, come is that the school sports partnerships are patently successful at providing sport within schools, which is the really vital thing and heads know that. I have yet to come across a headteacher who agrees with what Gove is doing.

“For that reason he will have to change his plans. This is really important. It is not about political point-scoring or humiliating U-turns. It is about the future of sport in our society and about continuing to value the volunteer spirit – continuing to value those who enjoy contributing to such a good causes. Cameron has to move on this.”

Let’s hope he does.