The UK loses £120bn a year through tax evasion, tax avoidance and uncollected tax; launching a crackdown on tax dodgers will raise billions to help the poor. 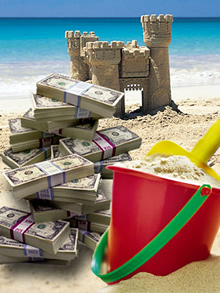 Our guest writer is Paul Collins of War on Want

Anti-poverty charity War on Want will demonstrate today after chancellor George Osborne announces the worst cuts in jobs and public services for decades under his spending review, under which poor people will be hit hardest by a financial crisis sparked by the rich.

War on Want will join a Coalition of Resistance protest outside Downing Street, where speakers will include Mark Serwotka, the Public and Commercial Services Union leader, and former Labour cabinet minister Tony Benn, arguing that it is scandalous the coalition government plans to make the poor suffer for a crisis they did not cause.

There is a positive alternative to the government’s cuts programme – an alternative that is within our grasp. Taxing the banks and launching a crackdown on tax dodgers can not only avoid the cuts, but raise billions to help the poor.

The most vulnerable people face worse living standards while banks rescued with a £500 billion bailout from trouble prompted by greed are now piling up profits and paying huge bonuses to executives: Lloyds TSB in August reported £1.6 billion profits with RBS recording £2.1 billion profits in the same month, while cash bonuses in the City will reach almost £7 billion, according to the Centre for Economics and Business Research.

There are warnings that cutting 500,000 public sector jobs over five years risks triggering a double-dip recession in Britain, as in many other European countries.

War on Want asks that banks pay their fair share to help tackle the crisis via a Robin Hood tax on financial transactions which could raise £20 billion in the UK alone. Reversing a programme of cuts in tax inspectors’ jobs and the closure of their offices would fight tax dodges.