This afternoon saw the Business select committee grill Vince Cable on the government’s decision to withdraw an £80 million loan to Sheffield Forgemasters. 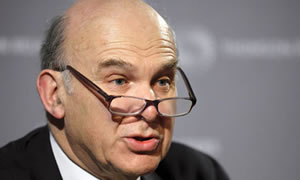 This afternoon saw the business, innovation and skills select committee hold a special session on the government’s decision to withdraw an £80 million loan to Sheffield Forgemasters.

The loan, cancelled in June, was described before the election by Nick Clegg as “just the sort of thing we should be doing”. The government has struggled to set out why the loan was cancelled – with the Sheffield MP incorrectly stating in front of the House of Commons that the directors were unwilling to dilute their shareholding.

Business secretary Vince Cable appeared in front of the committee, and tried to justify the government’s position. Without specific figures to hand, he continued to state that the loan was unaffordable, refusing to reveal the calculations made on the project’s value for money.

The loan to Sheffield Forgemasters would have created 400 jobs and several hundred more in the supply chain. They would have been high skilled, high tech jobs in nuclear energy, one of the key low carbon industries of the future.

Only one place in the world can do what Sheffield Forgemasters is attempting, and that’s in Japan. The industry is looking for a European base. After this government cancelled the loan, those jobs will go overseas – where governments want to support, not crush, their manufacturing industries.

The business secretary stated that the effect on Yorkshire’s economy was a separate factor to the affordability of the loan, which was the only one of 22 business department projects which faced the axe. It was one of 24 government projects cancelled or postponed out of 241 reviewed at the time. Those 241 projects were worth a combined £34 billion, and those that were cancelled £2bn. To say therefore that the £80m loan, which would have been paid back with interest, was unaffordable is disingenuous.

This was yet another opportunity lost for this government to describe a sustainable strategy for growth.

In this challenging economic environment, we all know that private sector loans to SMEs are not readily available. In the case of Forgemasters, the benefits of the loan would be felt across the industry, and would involve significant capital expenditure. This is exactly where the government should be stepping in – with strategic support for projects which cannot be secured through market mechanisms alone.

I sincerely hope that the government reconsiders this decision: strategic support for projects which offer genuine value for money should be at the heart of any business secretary’s role. And it is not just Sheffield Forgemasters that will lose out because of this – Sheffield, the steel industry and the civil nuclear supply chain will suffer as well.