Six months ago, many, many people from across London and beyond came to help me and Jim Fitzpatrick beat George Galloway’s Respect, reports Rushanara Ali. 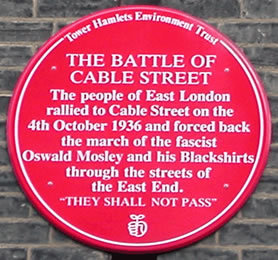 In a week when we are all waiting with trepidation for the results of the Comprehensive Spending Review, while marvelling at the twists and turns of Lib Dem MPs as they attempt to crawl out from the tatters of their higher education policy, there is a vital campaign happening on the doorsteps of Tower Hamlets. In less than a week, residents of the east London borough will be going to the polls to elect their first directly elected mayor.

Six months ago, many, many people from across London and beyond came to help me and Jim Fitzpatrick beat George Galloway’s Respect and the parties that would later join together and form the coalition. During that election the people of Tower Hamlets rejected the politics of division and joined with us backing our Labour vision of a united East End.

Since that election we have been putting that philosophy into action, challenging the far right English Defence League when they tried to march here, challenging the coalition on cuts to our public services and more recently fighting for Labour in this election.

Ed Miliband and Left Foot Forward have long argued that Labour needs to be a campaigning movement or it is nothing. By opening up the campaign to new volunteers we helped to create, with a fantastic team of organisers, a formidable campaigning force during the general election. Our team working under the banner ‘Uniting the East End’ attracted hundreds of volunteers, which let us do the most important thing – in elections – talk to voters.

Last time we had three years, in this election we have had three weeks! As MPs, Councillors, Greater London Authority members, Labour Party activists and community volunteers we are fighting as a Labour team on behalf of Labour candidate Cllr Helal Abbas, but we can’t do it alone. We need the support of activists from across London – so let’s start building that renewed movement in the East End, home to so many of the great  campaigns of the past.

What’s at stake next Thursday is a billion pound budget, in one the most vibrant and diverse boroughs at the heart of our capital. For the people of Tower Hamlets this isn’t about personalities, it’s about the real issues – schools, housing, jobs and the economy. This is no time for a Galloway-backed independent who appeals to the margins and wants to turn the clock back to the politics of the past.

Over this weekend, and on election day on 21st October, readers of Left Foot Forward have a chance to help defeat the Galloway candidate in Tower Hamlets, and make Labour’s Councillor Abbas a mayor who will finally turn the page on the politics of division, and start putting the people of Tower Hamlets first.

Please come and join us in this campaign, details of how you can help can be found below. The campaign office is at 349 Cambridge Heath Road, London, E2 9RA and will be open for canvassing and leafleting from 10am-6.30pm every day until the election. Please ring 0207 729 6682 or email [email protected] for further details or to let us know when you are available. With your help we can ensure a Labour victory on the 21st of October.

11 Responses to “Uniting the East End: A call to action in Tower Hamlets”