The Economist has stated that in 2008 the international student market was worth £2.9 billion in fees and another £2.3 billion in spending to the UK economy. 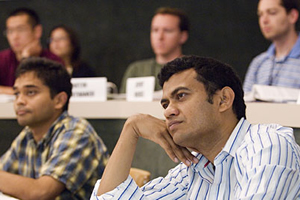 Our guest writer is Ranjit Sidhu, founder of Statistics into Decisions

Earlier this month, immigration minister, Damian Green told the Today programme that the number of visas given to international students was “a hot political topic”. He misses the point – they are an economic necessity. Mr Green would not admit whether there was or was not a benefit to this country from these international students. The fact’s speak for themselves.

The Economist has stated that in 2008 the international student market was worth £2.9 billion in fees and another £2.3 billion in spending to the UK economy – a total of more than £5 billion. Another benefit was that, having studied here, individuals would be more likely to work with UK companies and organisations when they returned to their country of origin. This ‘soft power’ network has benefited the US for decades.

The Government argues that it is not a good use of resources that one-in-five foreign students stay after their visa has expired. But this 20 per cent of international students are not staying illegally. Instead, they will either be carrying on with postgraduate degrees (fees revenue) or finding employment (tax revenue). What is wrong with 70,000 young, gifted, hardworking people staying in the UK? With an aging population this should surely be desirable.

In 2010, the number of study visas increased by 35 per cent to 362,000. Assuming a pro rata increase in revenue, this implies £3.7 billion in fees and £3.2 billion in other expenditure. So over the last year, this export industry has brought an extra £1 billion in revenue into this country.

By targeting the 70,000 international students who choose to stay in this country after they have finished their course, the Government is failing in its role of promoting the British economy. Worst still, if it chooses to restrict this industry by limiting the number of study visas it will not only hamper our universities in the international market, but send a message across the world that the UK government is not behind its higher education sector.

If we do not want these young, intelligent, motivated people to provide billions of pounds in extra revenue, there are plenty of other universities around the world queueing to take them off our hands.