A group of six of our most prominent high street banks have got the begging bowl out again and headed for the Treasury, reports Ben Fox. 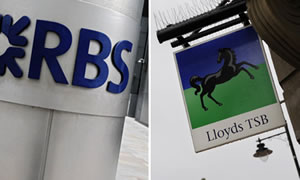 A group of six of our most prominent high street banks have got the begging bowl out again and headed for the Treasury. Sound familiar? Only this time they are asking the Treasury to help subsidise something which the banks should be doing anyway – lending to Britain’s credit starved small and medium sized businesses.

What is equally outrageous is the fact that the banks appear willing to work together to create a joint lending fund worth the princely sum of £500m. The banks include the bailed-out RBS and Lloyds group, as well as HSBC, Barclays, Spain’s Santander group and Standard Chartered.

A meeting between the banks and chancellor George Osborne and business secretary Vince Cable is expected to take place this week, and the fund will only be set up if the Treasury agrees to support the proposal with the bulk of the cash. In other words, the banks are unwilling to stump up even £50m each.

Of course, one solution which was outlined by both David Miliband and Andy Burnham in their leadership campaigns would be to establish a form of National Investment Bank or Credit Union. One way that this could be done is by using UK Financial Instruments (UKFI), the body created by the Treasury in 2008 to manage the taxpayers’ stock in bailed-out banks such as RBS, Lloyds, Northern Rock and Bradford & Bingley, to underwrite loans and credit to small businesses at competitive rates.

This would not be a big undertaking in relative terms. In addition to the ownership of Northern Rock and Bradford & Bingley, and an 84 per cent stake in RBS and 41 per cent stake in Lloyds, the Treasury is also currently underwriting capital investments for RBS and Lloyds totalling an estimated £37 billion. UKFI looks set to begin unloading the stock, with RBS and Lloyds returning to multi-billion pound profits, and to return Northern Rock to private ownership. This is highly premature.

The share values of RBS and Lloyds increased by 79 per cent and 80 per cent respectively between March 2009 and March 2010, and are likely to further increase in the short-medium term. Keeping hold of the stock would allow UKFI to underwrite a credible capital fund and also secure a higher return for the taxpayer.

One thing is for sure, the banks’ proposed capital fund is short on cash and, by extension, commitment. It would be laughable if the issue of business lending wasn’t so serious. A fund with capital of £500m or even £1bn could only sustain between £2.5bn-£5bn of new lending. If the belief is that such sums will kick-start growth in the British economy, then people need to get real. A £500m capital fund is like tackling a forest fire with a half-filled watering can.