UKIP’s autumn conference kicked off today in Torquay. High on the agenda is the choice of a new leader, following Lord Pearson’s candid announcement two weeks ago that he was “not much good” for the job.

UKIP’s autumn conference kicked off today in Torquay. High on the agenda is the choice of a new leader, following Lord Pearson’s candid announcement two weeks ago that he was “not much good” for the job. The successful candidate is expected to be announced in early November. Nominations will be placed soon.

The party came second in the 2009 European elections, and has 12 MEPs to its name. Despite winning almost one million votes in the general election, they failed to gain a single parliamentary seat. Representation at Westminster remains a main objective. It is thought this can be achieved by increasing UKIP’s public status, a task which demands a big personality at the helm.

Nigel Farage’s announcement today that he’s decided to stand has created a clear favourite. However, several other candidates remain prominent challengers. Here’s an assessment of the main figures:

Nigel Farage MEP (Ladbrokes odds: 4/5). Farage stood down as leader in November last year, in order to focus his energies on winning UKIP’s first Westminster seat. Despite a ConservativeHome poll putting him far ahead of speaker John Bercow, Farage eventually came third, with his plane crashing on the morning of polling day. He is still recovering from the accident.

After days of will he? wont he? speculation from UKIP members, Farage announced today that he is fit to challenge for the leadership. It is thought that he will pose as an injured hero at the conference, promising to fight through the pain for the good of the party. His prominent public status and charisma means he stands out as favourite.

David Campbell Bannerman MEP (2/1). A former Conservative special adviser, he is ‘widely seen as a potential leader’ according to the BBC. He wrote the 2010 UKIP manifesto, a wide-ranging document which former leader Pearson famously failed to master. He believes, “We have got to get more professional to seize the opportunities of the future.” His claims to be related to Henry Campbell Bannerman, the early 20th century Liberal Prime Minister, are rumoured to be entirely fictitious. 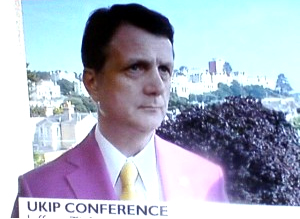 Gerard Batten MEP (10/1). Came second in the November leadership election to Pearson. He wants to further UKIP’s reputation as a radical alternative to the main parties. Appeared today on BBC News in a pink suit, which may undermine his credibility. He was attacked by Farage for harbouring quixotic aims, in particular the achievement of proportional representation.

Frank Maloney. The ex-boxing promoter, most famously of Lennox Lewis, has thrown his hat into the ring. Unfortunately for Maloney, the towel is likely to follow, as he is not seen as a political heavyweight. His experience is limited, having unsuccessfully stood for London Mayor in 2004 and as MP for Barking in 2010. Allegations of homophobia and racism continue to hound him – he allegedly refused to visit Camden during his mayoral campaign, as it was home to “too many gays“.

Tim Congden. Seen as a reformist candidate, who can improve UKIP’s reputation as a serious political party, and rescue it from repeated investigations from OLAF, the EU’s anti-fraud unit. An economist, he was a member of the Treasury panel which advised the Conservative government on economic policy from 1993 to 1997.

Eric Edmond MEP. A former Bank of England official. One of his main election pledges is ‘I will not employ any members of my family,’ which testifies to the level of corruption still thought to afflict UKIP. He claims he’ll drive it out, and has been championed for this.

Christopher Monckton (20/1). Arch-enemy of the Green movement, members fear his election would over-radicalise UKIP, adding his prominent status as a climate-change denier to the party’s Euroscepticism.

There is a very slight chance that a bouyant UKIP could tempt Eurosceptics within the Tory party to cross the floor. Daniel Hannan is 100/1 for the UKIP job according to Ladbrokes. The recent criticisms of William Hague by Tories Norman Tebbit (who endorsed UKIP in the 2009 European election) and John Redwood were ostensibly over the foreign secretary’s personal judgement, but many feel they reflect the growing frustration of the Eurosceptic right within the Conservative party.