While the Labour leadership election is likely to remain too close to call definitively until the day of the result, there is good evidence that the party will be able to unite around the winner. 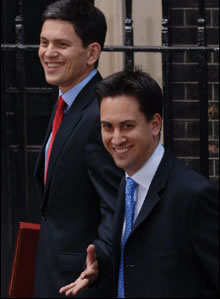 While the Labour leadership election is likely to remain too close to call definitively until the day of the result, there is good evidence that the party will be able to unite around the winner.

Small groups in the party will find it difficult to immediately reconcile themselves to the result if their favoured candidate is pipped at the post, most obviously among the campaign staffers and volunteers who have put heart and soul into the contest, along with small micro-tribelets among MiliE’s left flank on the blogosphere and MiliD’s right flank in the PLP.

But, once you have voted for one Miliband, you are most likely to go on to vote for the other brother as well.

YouGov’s leadership poll shows more than a quarter of Labour Party members are voting for both Milibands with their first two preferences in this five-candidate race, taking their lead from the Miliband brothers themselves.

Without a political earthquake, Miliband-Miliband second preferences seem unlikely to be counted as transfers. That would require another candidate to knock out a Miliband in an early round. (6-7 per cent of Miliband voters on both sides tell YouGov they do not plan to express a second preference; perhaps because they feel certain their candidate will be in the top two).

So, when the winning candidate reaches the 50 per cent post, they will also have been the second choice of up to a third of the votes in their rival’s column too.

The popularity of this Miliband-Miliband ticket also demonstrates a further formidable hurdle to the other three candidates seeking to win the electoral college. Even if you could first catch your Miliband, overcoming a Parliamentary deficit with a strong lead among members or trade unionists, that would not be enough to win without stemming the tide of fraternal transfers.

So perhaps part of the story of this election race is of how these mildly left and right-leaning varieties of social democratic moderation form a Milibandite cartel dominating the broad centre of party opinion.

It is notable too that centre-left media endorsements in this neck-and-neck race have often lavished praise on rival candidates. The New Statesman’s editorial endorsing Ed declared that “David Miliband deserves his title of ‘front-runner’ … the elder Miliband has the intellect, eloquence and experience to be Labour leader and prime minister”. The Mirror’s endorsement of David stated that “Ed Miliband is the surprise package of the contest … we have been impressed mightily by his enthusiasm, cogency and real offer of change”.

Both Miliband campaigns can point to ‘unity ticket’ endorsements, whether Jon Cruddas and Dennis Skinner for MiliD or John Denham and Oona King for MiliE. A similar phenomenon can be seen online, where well-known bloggers most strongly engaged in party activism have not ended up where some of their readers might have expected.

Grassroots leftie Don Paskino, deputy editor of Liberal Conspiracy, is voting for David Miliband arguing that he presents the best opportunity for a leftwards shift; Luke Akehurst – hammer of the Trots and among the stanchest voices of Labour’s loyalist right – is in the Ed Miliband camp, writing:

“I intend to be equally relaxed after 25 September if accused of being a Milibandite – whether that’s under Miliband D or Miliband E.”

25 Responses to “The unity ticket? A quarter of party members are voting for both Milibands”