References to the pattern of intergenerational worklessness in households are rarely accompanied by any relevant statistics on the no. of households involved. 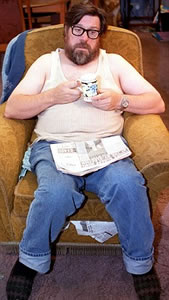 The household where ‘nobody has worked for generations’ has long been a favourite illustration of the failure of the welfare state not just among tabloids running ‘Shameless’ benefit scrounger stories, but among broadsheet commentators, politicians and even welfare professionals.

However, references to this pattern of intergenerational worklessness within households are rarely accompanied by any relevant statistics on the number of households involved. In fact, they are usually framed by data concerning quite different phenomena – most frequently, the number of households which are without anyone in employment at a particular point in time. When assertions are framed by irrelevant data, beware.

The last few weeks have seen an epidemic of this sort of thing as government prepares for the next round of welfare cuts. Recently released Office for National Statistics data on households and employment (which does not concern intergenerational patterns) has been shamelessly exploited by ministers and government spinners seeking to implant the image of the intergenerational workless household in the public imagination.

The only innovation is that government has also attempted to ground its assertions in what is claimed to be new evidence on households where no adult has ever had a job. That the evidence in question was secretly briefed to journalists rather than officially released by the Department for Work and Pensions indicates that government is unsure of its ground here, and with good reason.

In fact, data provided by ONS to the TUC allows us finally to put some figures on the shadowy archetype of the household where ‘nobody has worked for generations’. The conclusions will not be comforting for the government.

The stereotype of the intergenerational workless household is based on intuitions rather than analytical categories, but there are some necessary conditions which a household would have to meet to fit the stereotype on any interpretation. It would have to include more than one generation of the same family; there would have to be at least one parent and at least one non-dependent child (roughly, over 18 or if 16-18 not in full-time education) from the same family; and nobody in the household can ever have worked.

These are necessary but not sufficient conditions, for at least two reasons. Clearly, to impute intergenerational worklessness, the non-dependent child(ren) have to have been available for work for some time: they cannot have just turned 16 or just left full-time education.

At the same time, the notion of an intergenerationally workless household depends on the composition of the household having been stable for some time: for example, a household consisting of a parent who has never worked and a non-dependent child who has never worked can hardly be included if up to relatively recently it included a working parent. Households change their composition all the time, which is one of the reasons why the intergenerational workless household has proved a somewhat elusive phenomenon.

The data throws no light on these sufficient conditions, but we can use the necessary conditions to set an upper bound to any estimate of the number of households which are intergenerationally workless.

Our calculations from the ONS data provided to TUC gives (download spreadsheet) a figure of 20,230 such households, out of a total number of households including non-dependent children of 3.9 million. Given some of the claims which have appeared in the media over the last few weeks, we stress that there are no missing zeroes in that figure.

A back of the envelope calculation suggests that these households account for far less than one per cent of all workless households on ONS’s recent data (applying rates from this data to ONS’s September figures on household worklessness). This admittedly crude calculation suggests that DWP should not waste any more time producing estimates of a phenomenon which is so clearly not of a scale to bear the ideological weight which has been imposed on it.

32 Responses to “The myth of the intergenerational workless household”