Lib Dem supporters are rallying behind Clegg and his Coalitioneers. The anticipated fallout has yet to surface, and a healthy dose of dissent has risen in its place. 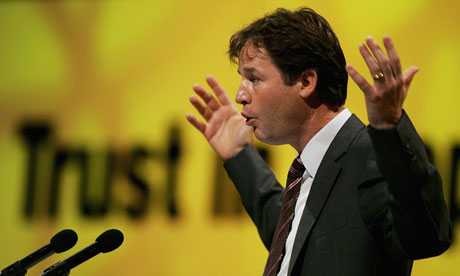 Lib Dem supporters are rallying behind Clegg and his Coalitioneers. The anticipated fallout – including claims that “the Lib Dem conference will pass awkward, sometimes devastating resolutions” – has yet to surface, and a healthy dose of dissent has risen in its place.

Following May’s special conference, in which party members gave their full backing to the Coalition, there has been cause to fear a sea-change in the nature of the Lib Dem party conference, which for years has lived up to its reputation as a model of party democracy. But a string of resolutions shows that internal debate remains alive and well.

There is promising evidence that this is reaching the ears of those in power. Chris Huhne implied that he’d taken on board at least some criticism of the negative impact of the budget. In a fringe event, Huhne suggested that the Coalition may reduce cuts if growth does not recover. To Andrew Adonis’ question, “If growth is low, you’re basically saying the cuts will be scaled back?” Huhne suggested that Coalition economic policy was not set in stone, replying:

“You have to assess this as things go along and look at what the threats are.”

Nonetheless, the recently de-seated Evan Harris has criticised Clegg for defending the indefensible (the fairness of the budget) and for appearing to reject ex-Labour supporters.

The most tricky moment so far has been the near-unanimous support for a motion rejecting Michael Gove’s free school programme. Unfortunately Clegg moved quickly in his attempt to smother this, with this afternoon’s announcement to Channel 4 News:

“I think there is a misunderstanding [among Lib Dems] bluntly between what the free schools proposal is alleged to be trying to do and what it will actually do. It won’t be taking resources and people and attention away from other schools … and crucially, as I stressed in my speech yesterday, it won’t do what would be genuinely divisive. It won’t be introducing selection through the back door, which I’m staunchly opposed to.”

Quite how free schools will not take resources away from others is open to question.

Although the conference is unlikely to overturn Clegg’s attitudes on free schools, concern that the Lib Dems’ voice will be drowned out in the Coalition has been nullified by a string of more realisable motions. Three in particular have been passed which, Andrew Sparrow points out, stand a fair chance of demonstrating a traceable Lib Dem influence upon government policy:

Such developments seem to deal with Mark Pack’s concern that,

“the party could and would be better if it more often made public its disagreements [within the Coalition], such as over the opting out of the EU directive on sex trafficking.”

And Pack’s worries are also allayed by Simon Hughes promise to see Trident and tuition fees axed, and by Clegg’s refusal to bow to the legal pressures on a member of the Government, with his renewed insistence yesterday that the Iraq war was illegal.

Forces within the party do seem prepared to embrace the Coalition. At Liberal Vision, Andy Mayer argues the party should not be in thrall to Labour voters. And today Paul Berstow made the supremely confident (and bewildering) step of turning on the Guardian – the party’s main media backer in the last election – arguing that the paper misled readers on the extent to which Andrew Lansley’s white paper disagreed with Lib Dem policy. He spat the following:

“I would encourage people to … stop reading the Guardian, because the Guardian is a spreader of misinformation and lies.”

The Guardian’s Andrew Sparrow described the attack as “astonishing“, and did not know “what the article was which upset him so much, but I will try to find out.” Could this Polly Toynbee piece from July be it?