In a room packed with women, four men and one woman set out their pitches for being the Labour Party’s champion for women. 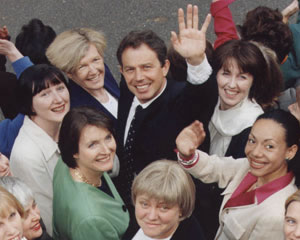 In a room packed with women, four men and one woman set out their pitches for being the Labour Party’s champion for women. After an exhausting number of hustings already, last night found the wannabe leaders quizzed exclusively on issues that affect women. The event, which was organised by the Fabian Women’s Network, covered a wide range of questions – from the internal issues within party politics to international women’s rights.

Hours before, Labour MPs voted on the percentage quota of women that should be in the shadow cabinet. The proportion favoured was 31 per cent – meaning that at least eight members of the team will be women. Although it remains under-representative of women, it is a lot more equal than the coalition cabinet – of which only 14% of positions are held by women, as Left Foot Forward reported in May.

The leadership hopefuls disclosed how they had voted:

Before the hustings began, David Miliband released his ‘five point plan for gender equality’. One of his most significant and radical ideas throughout this campaign is to consider job sharing for shadow ministerial positions. The Daily Mail consequently reported that Ed Balls and his wife, Yvette Cooper, would be considered to job share the role of shadow chancellor. Mr Balls denied the rumours.

Earlier in the campaign, he announced his campaign to restore Domestic Violence Protection Orders – an idea of the last government that the home secretary Theresa May has scrapped.

Mr Burnham’s idea of remote voting – so that MPs in constituencies out of London or those with other commitments could vote from home – seemed to be a popular idea. He also told the Women’s Network before his appearence:

“We need to support women who are or would like to be office-holders within the Party, through training, through mentoring and by abandoning forever the ‘sink or swim’ ethos.”

On the ‘macho culture’ that the Labour Party and parliament continue to suffer from, Ed Miliband said that he would like to see politics more of a nine-to-five job – ensuring that women wouldn’t have to choose between family duties and a career in politics.

Diane Abbott said that she had an advantage as she was the only of the five who had the experience of balancing being a single parent and a politician. She also pointed out how useful the annual women’s conference was for policy making and networking, and that she would bring it back to life if elected.

The blunder of the evening came from Andy Burnham, who admitted he was not familiar with the case of Iranian woman, Sakineh Mohammadi Ashtiani – who was sentenced to death by stoning for adultery. His admission did not go down well among  members of the audience.

To see more on what each of the contenders has to say on women in the Party, read Lead4Women’s Q&A here.

24 Responses to “Leadership candidates in final plea for female vote”