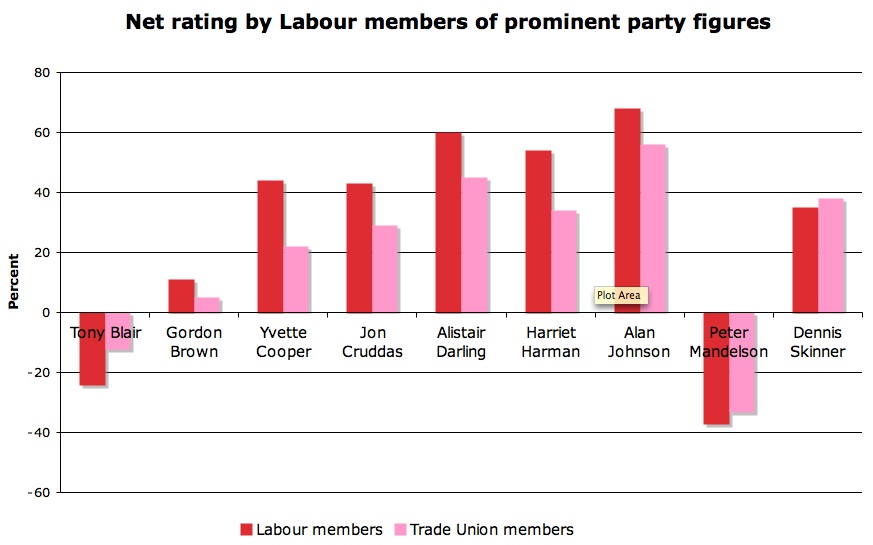 One possible theory about the swing from David to Ed Miliband, reported in YouGov’s latest poll, is that the interventions of Tony Blair and Peter Mandelson may have done more to hinder than help the candidate that they were trying to assist.

But members no longer think that Blair is a public asset to the party now. 58% of party members say he is now more a liability than an asset for Labour while only 34% regarding him as an asset.  Perhaps counter-intuitively, party members take a slightly harsher view than trade unionists, where 38% regard Blair a Labour asset and 50% a liability. Party members supporting David Miliband are almost evenly divided on the Blair factor, narrowly judging him an asset by 47% to 43%. Ed Miliband’s supporters strongly differ, thinking Blair a liability by 71% to 22%.

However, Blair is saved from finishing bottom of the YouGov Labour reputations poll by Peter Mandelson, who is considered an asset by 27% and a liability by 64%.

Opinions divide about Gordon Brown, who is considered on balance an asset by 51% to 40%. The negative ratings for Blair and Mandelson are in contrast to a ‘broad church’ approach among the party membership most prominent figures across the range of party opinion. Alan Johnson (77%) Alistair Darling (75%), Harriet Harman (73%), Yvette Cooper (58%), Jon Cruddas (55%) and Dennis Skinner (55%) are all viewed by majorities of members as assets for the party.

Despite Labour members acknowledging that Blair has become a divisive public figure, the ex-PM’s advice to the party about its future may carry more weight. YouGov also polled party members on his argument that the party should move “not a millimetre” from the New Labour approach.

5% of the party think this is wholly right and another 46% think that, while some changes are needed, the New Labour approach should generally be retained. That gives 51% for the moderated Blairite argument, perhaps allowing a few centimetres for a change agenda, with 47% thinking Blair is largely or wholly wrong.

David Miliband supporters back Blair’s argument 73 to 25%, while Ed Miliband’s backers reject the advice by 66% to 33%, reflecting that how to handle the New Labour legacy has been an important issue in the leadership debate.

14 Responses to “Labour members fall out of love with Blair”