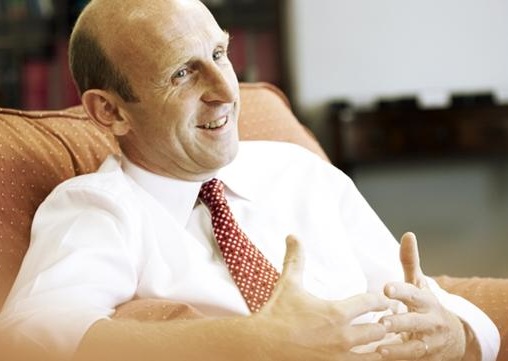 Next Wednesday, nominations will open for Labour’s shadow cabinet election. With 14 male members of the current shadow cabinet chasing a maximum of 13 places, one of Labour’s big guns can expect to be disappointed.

One man hoping for an even bigger upset is John Healey – a Minister of nine years who built a formidable reputation in three Whitehall departments for his easy manner and attention to detail. Healey is standing for the Shadow Cabinet and claims the support of Alan Johnson and Jon Cruddas as well as new MPs and long-time LFF contributors Chuka Umunna and Rachel Reeves. Paul Waugh reports that he’s the “dark horse” of the race.

I caught up with the MP for Wentworth and Dearne on a campaign visit to Chuka Umunna MP’s Streatham constituency where the pair visited the Valley Road estate. Healey has been widely credited with raising the profile of housing during his year as Minister of State. Writing for Left Foot Forwardin March , Jon Cruddas said, “The approach and policy positions adopted by John Healey have been welcomed throughout local government and must be sustained.” Chuka Umunna concurs. “Labour should have done more on housing since 1997,” he tells me. “John kick started this. He’s a great campaigner.”

Visiting various properties in desperate need of repair, his passion for the policy area was clear. But why had Labour neglected the area for so long? “We did a number of very good things but we set out to do certain things and having started said we’d finish them,” says Healey. “For instance, we put £19 billion of public money matched by private sector money into upgrading council homes that hadn’t been done up for decades. That was the priority given for capital investment available rather than building new homes. We were late on building new homes, especially for those needing affordable rent.”

But the recession, he claims, allowed the party to rethink:

“I managed to get an extra £1.5 billion – even when finances were tight – so for the first time we gave housing a priority and switched money from education, health and the home office.

“That enabled us to build more affordable homes – last year and this year for first time buyers but particularly for rent – than we had even at the high-water mark before the recession hit. We did that because we needed the homes, it helped to create new jobs, and they only got it if they had apprenticeships in place.”

In his mission to get the extra cash and devise innovative house building schemes, Healey talks about defeating the “orthodoxy in Whitehall.” He describes himself as a “politician not a manager” and is careful not to use wonkish or technocratic language.

Healey sees his mission as fighting for the “squeezed middle” and wrote a memo to the new leader on the subject. His thesis is that:

“The political and policy debate is heavily dominated by its London base – people in the London-based media, policy circles, and most political circles – where the reference point that people thoughts was middle Britain was people earning £40,000 to £50,000 per year. Even in London, nearly two-thirds of families take home less than £30,000 a year. But if you look at the real middle Britain, the one that’s been so squeezed in the recession and has still not recovered, the midpoints are very, very different.”

The true median wage, he tells me, is £22,500 per year. He calls on the party to hold its own Spending Review “settlement” in the weeks ahead and to consider the 7 million families in the true middle as it decides what it would axe and what it will fight to protect. He calls for the defence of universalism in parts of the welfare state, working tax credits and child tax credits, support for childcare, new housing – especially for those who will “wait forever on council waiting lists” – and skills programmes including Train to Gain which the Government has axed.

Healey has picked up a number of the issues this week in a spate of articles. In the Municipal Journal, Healey writes, “Families, pensioners and single working people will have no way of making up the £10 or £12 a week average shortfall that the first wave of housing benefits cuts will cause in April. Many will be driven into debt and could be driven out of their homes and local neighbourhoods.” In another for the Local Government Chronicle, he attacks “the decision by government to wash its hands of role in securing the new affordable homes required in all parts of the country to meet people’s needs and aspirations.”

With this effective approach to opposition, it is little surprise that Mr Healey has supported Ed Balls’ campaign for leadership. But he accepts that the shadow education secretary’s chances are limited – Healey is giving his second preference to Ed Miliband out of “loyalty” (Miliband Jnr stayed with Healey and his wife in Yorkshire when he was seeking selection) but he seems relaxed about a David Miliband leadership. He is clear that the party will put the internecine warfare of the new Labour era behind it but warns that the party must be “greater than the sum of its parts … something that wasn’t true in Cabinet”.

And while Healey prefers not to lay out prescriptive policies for the new leader, he thinks the terms ‘middle England’ and ‘core vote’ should be banned from shadow cabinet meetings:

“[These terms were used] less to be clear about what we should be doing politically and how we should campaign, and more to position themselves for the internal party tussles. So they became proxies rather than useful shorthand for good political insights and good campaigning.”

Overall, though, Healey is upbeat about the party’s prospects. “We’re in a pretty good position,” he tells me as we depart. “The Parliamentary Labour Party is up for it, we’re concluding a leadership election with a degree of openness and unity which few could have predicted, and we’re determined to draw a line on the Blair/Brown era.”

23 Responses to “John Healey’s fight for the “squeezed middle””