Kevin Meagher on why it would be a mistake for liberals and those on the left to push Catholics out of the progressive club with their anti-Papal rhetoric. 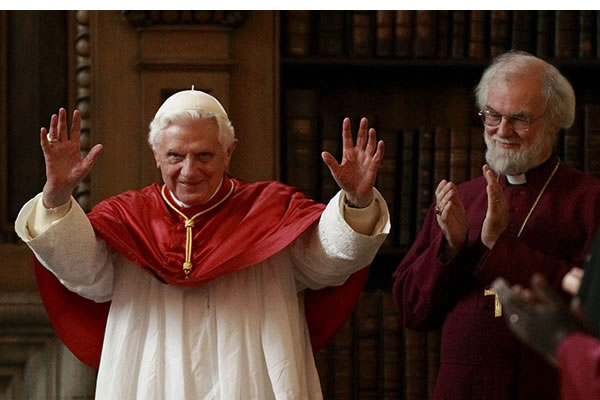 For many Catholics, the last few weeks have felt like being trapped in the home end at Ibrox during a Rangers versus Celtic “Old Firm” game. The tone of the attacks on the Pope ahead of his state visit to Britain have been splenetic, their tempo relentless. They have ranged from snide criticisms about paying for the state aspects of his visit (an invitation that came from a Labour government) through to the cartoonishly offensive remarks about the Pope’s German origin.

Over at Spiked, Frank Furudi described liberal anti-popery as an “Inquisition-in-reverse”, noting that the Pontiff’s visit seems to have “provided much of the British cultural elite with a figure that it is okay to hate”. Meanwhile Claire Fox, director of the Institute of Ideas, noted that while many reacted with horror at the French and Belgian ban on the burqa, “the response of some secular campaigners shows that such demonisation of religious groups is alive and kicking in the UK”.

The well-promulgated views of atheist deity, Richard Dawkins, will, of course, come as little surprise. But like boxing promoter Don King before a title fight, Dawkins has ratcheted his rhetoric to risible heights of self-parody. His message to the Pope?

“Go home to your tinpot Mussolini-concocted principality and don’t come back.”

Commenting on today’s ‘Protest the Pope’ march in London, the New Statesman’s Laurie Penny wades in:

“On Saturday, I’ll be marching through my home city beside thousands of others to tell bigots and dogmatists everywhere that if they try to push back at the raw edge of modernity, they’re going to get cut. If that conviction makes me anti-Catholic, then just give me a pen and show me where to sign.”

Meanwhile those irascible grumps at the British Secular Society should lie in a darkened room until the Pope has left. His every utterance seems to induce apoplexy.

Like many ordinary Catholics, my disdain for the vulgar, unworthy sentiments of Dawkins and his fellow secular jihadists is total; but I am duty bound to observe Voltaire’s dictum about defending the right to be expressed that with which I profoundly disagree. That is an absolute. As a liberal, I abide by it. But freedom of conscience is what Catholics in Britain demand in return. And that is an absolute too.

Many Catholics do not agree with every dot and comma of liberal-left theology. There are real philosophical differences over a range of social and moral issues; there is no point pretending otherwise. But there is enormous common ground between Catholics and other progressives around fair trade, arms reduction, the environment, human rights, racial justice and “solidarity towards the poor”, as the Pope made clear in his address in Westminster Hall yesterday. These provide the basis of a profound partnership and should not be casually dismissed.

Ordinary lay Catholics and clergy who supplied the infantry of the Make Poverty History campaign, or provide food and friendship to refugees and asylum seekers are progressives too. In deed, not just in word. Some people on the left seem to have a problem internalising that ‘contradiction’. But they had better. An attack on the Pope is an attack on all Catholics. Is the left in this country so over abundant with support that it can afford a ‘friendly fire’ incident that excludes literally millions of Catholics from membership of the progressive club?

That would be solely remiss given Catholics are some of the best members. As Ipsos MORI found while fewer than a quarter (22 per cent) of the public generally describe themselves as “Old Labour”, over a third (34 per cent) of Catholics say that term best describes their political view.

But this has not stopped David Cameron spying an opportunity to make a grab for Britain’s Catholic voters by aligning ‘The Big Society’ with Catholic social teaching in a piece in The Tablet. Of course the social catastrophe that awaits the poorest communities in Britain thanks to the coalition’s cuts is inimical to those very same teachings. But the fact that Mr Cameron is even trying should set alarm bells ringing.

Catholics have been a beleaguered minority within the British state for 500 years, suffering generations of privation and state-sponsored discrimination. There is a particular context to the experience of British Catholics that their mouthy critics should show more sensitivity towards.

These rhetorical attacks are violent, intimidating and provide a “dog whistle” for those whose objection to Catholicism will not be expressed intellectually. We are no more than one generation on from noxious, open, anti-Catholic bigotry. Once it came from reactionaries and Protestant fundamentalists. Now, alas, it comes wearing ‘liberal’ clothing.

“Most of the Pope’s detractors will admit that there is an old, embarrassing kind of “bad” anti-Catholicism, based on prejudice, ignorance and nationalism. They claim to represent instead a ‘good’ kind of protest, based on ethics and evidence. The distinction is not always obvious.”

If some on the liberal left have a problem with the Catholic Church then there must be an agreement to disagree. So-called liberals need to “walk the talk” on liberalism and park the violent rhetoric. My appeal to fellow progressives is not to make the incalculable, historic mistake of pushing Catholics out of the club.