Twitter sentiment for Nick Clegg is down sharply - while David Cameron’s rating has risen slightly, in another stark illustration of the unpopularity of the ‘sell out’ deputy prime minister in the three months since the general election. 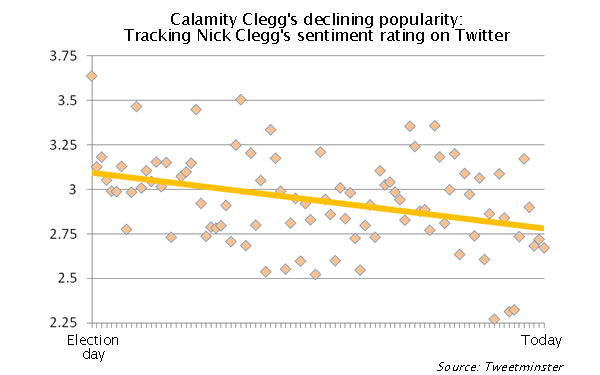 Twitter sentiment for Nick Clegg is down sharply – while David Cameron’s rating has risen slightly, in another stark illustration of the unpopularity of the ‘sell out’ deputy prime minister in the three months since the general election. Sentiment for the Liberal Democrats is also down, though not by as much as for the party’s leader, who, for the next fortnight, is effectively running the country while the prime minister is on holiday.

The findings are revealed in Tweetminster’s analysis of five million tweets relevant to the coalition’s first hundred days, while there was further woe for the coalition, and the Lib Dems in particular, in the latest YouGov poll for The Sun, in which 59 per cent of respondents said the Lib Dems had sold out their principles in joining the coalition, 62 per cent said it was no longer clear what they stood for, and only 14 per cent believed the coalition would last more than four years.

Also today, Labour leadership candidate Ed Miliband published a list of the ten biggest mistakes the coalition has made in those 100 days, which he says have been marked “by a series of misjudgements and short-term decisions, which will take Britain backwards and fail to secure a fairer and more prosperous future… [and] by short-termism and repeated blows to our public services and British industry and jobs”.

“In such a short space of time, we have already seen the government waste NHS money on an unnecessary top-down re-organisation and scrap support to British businesses, such as the cancelled loan to Sheffield Forgemasters. We have seen them slash the school rebuilding programme, hammer working people with an unfair VAT rise, and put at risk the support in the country for voting reform by adding in a gerrymandering clause that helps the Tories to win seats.

“It is no surprise that David Cameron has chosen not to publicly celebrate these 100 days in office.”

The ten are: the deep cuts which risk a double-dip recession; the £389 per family VAT tax bombshell; the cuts to business support, from Sheffield Forgemasters to the abolition of the Regional Development Agencies; slashing the number of university places; axing the Green Investment Bank; abandoning support for clean coal; scrapping the Building Schools for the Future programme; abandoning the young people’s guarantee of work for the unemployed; the £3 billion top-down re-organisation of the NHS; and the gerrymandering redrawing of constituency boundaries bill.

In terms of topics, the BP oil spill, the wars in Iraq and Afghanistan, jobs, cuts, schools and the ‘big society’ were among the most trended, while NHS reform, immigration, crime, climate change and electoral reform had a smaller number of mentions than might have been expected. The top media influencers were BBC News, The Guardian and Reuters, with Alastair Campbell, India Knight and Krishnan Guru-Murthy the most influential journalists.

“With this report we wanted to try something different. Over the past few months we’ve processed a lot of data and our aim was to present this information in a format that provides both a snapshot and insights into the issues that have framed the coalition’s first 100 days.

“And to do this comment-free – by visualising the topics and their link with the individuals, news stories, organisations and institutions that are shaping the issues and consequently influencing public opinion.”

Tweetminster’s chart of the coalition’s first 100 days can be downloaded here.