In his Fabian Essay, reported in this morning's Guardian, Ed Miliband has written that the loss of less-affluent voters cost Labour the general election, and said that his rejection of "New Labour nostalgia" made him the modernising candidate in the leadership election. 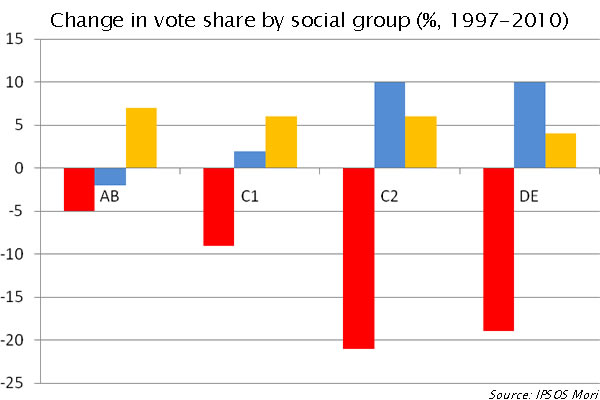 In his Fabian Essay, reported in this morning’s Guardian, Ed Miliband has written that the loss of less-affluent voters cost Labour the general election, and said that his rejection of “New Labour nostalgia” made him the modernising candidate in the leadership election. Mirroring analysis published by Left Foot Forward in May, Miliband backed up his point about Labour’s lost voters in a study published this afternoon.

• Labour’s share of the vote amongst C2s and DEs is down considerably more between 1997 and 2010 than the party’s decline in more affluent classes (see graph below);

David Miliband, who along with his brother are front-runners in the leadership race, has also written a Fabian Essay, in which he argues Labour’s lack of a shared ideology is a problem for the Party when opposing coalition cuts; he writes that “voters – many of them our voters – spent the election wondering whose side we were really on”.

He added that Labour needs its “own story of political economy that embraces neither the masochism of George Osborne nor the denial of economic reality”. Diane Abbott, Ed Balls and Andy Burnham have also written essays.

The latest Labour List Labour leadership survey, meanwhile, places Ed Miliband narrowly ahead among first preferences, with a 33.4% to 30.2% lead over his brother. The self-selective Labour List survey was conducted between 1.30pm on Monday 9th August and noon on Friday 13th August – 912 readers participated, 83% of whom said they were party members.