With one week to go before Labour Party members and affiliates receive their ballot papers, all is still to play for before the new leader is announced on September 25. 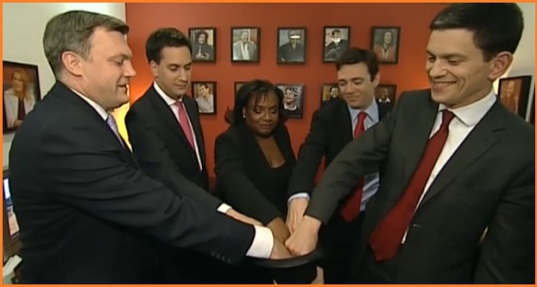 With one week to go before Labour Party members and affiliates receive their ballot papers, all is still to play for before the new leader is announced on September 25.

In what was dubbed to be his keynote speech, David Miliband last night addressed activists and a large clutter of members of the media, hot on the heels of his endoresment by influential Labour left-winger Jon Cruddas.

Symbolically ‘Blair’ (not least the stage management), the hosting venue was the King Solomon Academy near Edgware Road. The school was an investment of the last government and the head teacher was trained on the Teach First programme.

While praising the men he hopes to succees, he also pointed out some of their mistakes:

“Tony and Gordon did great things. Really great things. But I know that in Tony’s time he did not focus on income inequalities, stopped devolution at Scotland and Wales when we should have carried it on, and too often defined himself against the party not against the Tories; and Gordon was wrong about the 10p rate, and wrongfooted in debates about the role of the state and the importance of crime and security as Labour issues.”

Tackling what may be thought of as traditionally ‘leftist’ areas of redistribution of power, wealth creation and building a new labour movement – his arguments still seemed more Third Way than new way. ‘Moral economy’ was the new idea of the night – we were given little clarification or definition, other than: “A… much wider access to capital and wealth, across classes and the country”.

“Our values can be the foundation for us to win again. With me there will be no false choice between values and power. By putting our values into action in the right way, Labour can be the change Britain needs.

“Change our party with our eyes firmly fixed on change for our country.  Change to put power, wealth and opportunity into the hands of the many not the few.

David delivered his speech like a leader, but his political appeal needs to be strengthened to unite the broad-church of the Labour Party to be effective in opposition.

In his article for Pink News, Ed outlines his commitment to LGBT issues including: marriage equality, better legal protection against discrimination and discretion for those seeking asylum on grounds of sexuality-related persecution.

“I want to see heterosexual and same-sex partnerships put on an equal basis and a Labour Party that I lead will campaign to make gay marriage happen.

“I also believe we needed to show greater leadership on the question of those seeking asylum because they face persecution in their home country because of their sexuality. The fact that many forced to return to their home country were advised to be “discreet” is tantamount to an admission that the system recognised the dangers of their forced return but did too little about them.”

Andy Burnham recently told Yoosk that the Labour Party should be willing to work with the Liberal Democrats if a hung parliament situation is here to stay.

“(Labour) should treat the Lib Dems on an issue-by-issue basis. If they get things right then we should applaud them, if they don’t then we should be unstinting in our criticism.”

On tackling the issue of the postcode lottery and where a child is born determining their life chances, Andy refers to his manifesto, Aspirational Socialism.

“I think we need a country where we help people from all backgrounds to fulfill their potential abilities.”

At the beginning of the week, Ed published a ‘10-point contract‘ with the party members, outlining changes and reforms needed within the Party.

Left Foot Forward caught up with Ed yesterday. In a wide-ranging interview he spoke about his campaign, his time in the Cabinet and why he’s fighting to win.

“What we actually need to do here is put together a programme that is credible on the economy and on interest rates but at the same time will deliver the decent public services and the fairness that the majority of lower and middle income families want.

“The idea that we should either only focus on unskilled working people on the one hand or only focus on middle England on the other, I think both those things are pretty out of date.”

In a low-key campaign, Diane has become somewhat infamous throughout the campaign for her outspokenness on her fellow contestants – once referring to them as “geeks in suits“. In an Independent article yesterday, she writes of the Miliband brothers and Ed Balls’ ‘pandering to Middle England’, singling out David Miliband:

“I suspect David Miliband is not suggesting a leftward shift on these issues. It does not seem to occur to him that if voters (including middle-class voters) are disillusioned with politicians, it might have something to do with the notion that we do not believe in anything anymore…

“There are many examples of the failure of the Labour Party to reflect the concerns of the working class in its policy making. The obvious one is the way that Gordon Brown (supported by Ed Balls) scrapped the 10p tax rate soley to fund a cut in the basic rate for Middle England.”

On David Miliband, she adds:

“It does not seem to occur to him that if voters (including middle-class voters) are disillusioned with politicians, it might have something to do with with the notion that we do not believe in anything anymore”