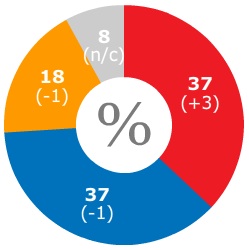 Today’s ICM poll for the Guardian puts the Labour party on level terms with the Conservatives for the first time since October 2007. But as noted by UK Polling Report’s Anthony Wells, “the Guardian’s report concentrates upon the findings on the economy”. The topline number is buried on page seven of the paper and appears in the tenth paragraph of their online story.

“There is a new ICM poll in the Guardian tomorrow that probably isn’t what David Cameron hoped for on his 100th day in power. Topline voting intention figures are CON 37%(-1), LAB 37%(+3), LDEM 18%(-1). This is the first time an ICM poll has shown Labour catching the Conservatives since October 2007 and the election that never was.

“Despite this rather striking finding, the Guardian’s report concentrates upon the findings on the economy, which is rather more positive for the government.”

In mentioning the finding towards the bottom of their online piece, the Guardian’s Larry Elliot and Tom Clark write:

“But despite some reasonably strong personal numbers for the deputy prime minister, Nick Clegg, when it comes to voting intentions there are clear signs that the first peacetime coalition in the era of universal suffrage is serving his Liberal Democrats less well than the Tories. Where the Conservatives are holding on to the 37% vote share which achieved in the election, a quarter of those who backed the Lib Dems have since switched sides, leaving the third party on just 18% – down one point on the month, and six on the election. Many of these deserters have drifted towards Labour, taking its standing to 37%, and allowing a leaderless party to run the Tories level for the first time in three years.”

The ICM / Guardian General Election prediction poll put the Tories on 37 per cent, Labour on 28 per cent, and the Liberal Democrats on 26 per cent.