Nick Clegg today set out his concerns about income inequality in a speech on social mobility. His remarks put him at odds with George Osborne who will talk only of "equality of opportunity". 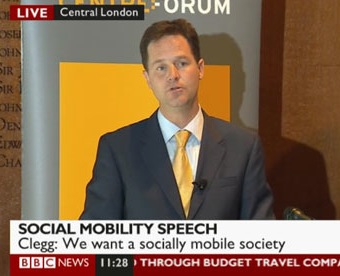 Speaking today on social mobility, Nick Clegg appeared to create a new front with his Conservative colleagues by openly discussing the need to reduce income inequalities. Only yesterday, George Osborne outlined that his focus was on equality of opportunity and not equality of income. A debate has been raging in recent weeks over the conclusions of ‘The Spirit Level‘ by Professors Richard Wilkinson and Kate Pickett.

“The goal of improving social mobility overlaps with other objectives for social policy, such as reducing poverty or narrowing income inequality.”

Although making it clear that social mobility and income inequality were not the same, he outlined his own commitment to tackling the problem.

In answer to a question by Sam Coates of The Times, Mr Clegg explicitly referenced the current debate over ‘The Spirit Level’ and, while dismissing the idea that Britain could ever be a perfectly equal country, outlined his view that income inequality was problematic and that “extremes of wealth inequality” were wrong especially when they became “stratified”.

The Deputy Prime Minister’s remarks appear to be at odds with those of Chancellor George Osborne just yesterday. In his speech yesterday, Mr Osborne referred to “equality of opportunity” rather than tackling income inequality. And as noted by Tim Montgomerie on Conservative Home yesterday:

“Mr Osborne used his Today programme interview to distance himself from the idea that greater equality of outcome should be a government aim. He said that he wanted to deliver equality of opportunity and that the Coalition’s reforms in education, welfare and health – as well as the reduction of the deficit – were part of his hope that a child born today would enjoy a better chance to succeed in life than a child born during the Brown-Blair era.”

Although David Cameron name checked the work of Wilkinson and Pickett at his Hugo Young Memorial lecture last year, Conservative think tanks such as Policy Exchange and the TaxPayers’ Alliance have, in recent weeks, been challenging the findings of the Spirit Level. Malcolm Clark has debunked these attacks on this website. Much to Mr Montgomerie’s chagrin, 11 Tory MPs have signed a pledge to narrow the gap between rich and poor.

16 Responses to “Are Clegg and Osborne at odds on income inequality?”