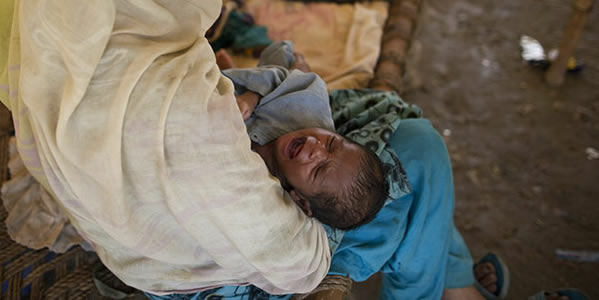 UN Secretary-General Ban Ki Moon, returning from viewing the devastation in Pakistan for himself today has told the world to ‘wake up’ to the full scale of the disaster, now affecting an estimated 20 million people – including millions of children under threat from waterborne diseases.

I welcomed the government’s initial response to the terrible tragedy unfolding in Pakistan.

Along with the work of leading British humanitarian NGOs, in the short-term, UK aid will hopefully make a vital difference to the millions now affected.

But a series of revelations in recent days show that international development secretary Andrew Mitchell not only has a worrying lack of vision for reform of the global humanitarian system, but worse still is threatening the future ability of the world to respond.

Belatedly, he has finally taken to the airwaves criticising the slowness of the international response and the lack of funding for the UN appeal. I sincerely hope he has been backing up this media comment with actual phone calls and meetings with other donors.

But I could only listen with incredulity as Mitchell spoke in interviews about the work of the key UN disaster response fund, the CERF (Central Emergency Response Fund) and how the Pakistan disaster needed even more funds than the CERF was able to provide – at the same time as leaked proposals from his Department over the weekend showed that he planned to abandon Labour’s commitments to provide more funding for this vital mechanism.

Amongst a list of 100 projects earmarked to be dropped in a memo from DfID director of policy Nick Dyer is Labour’s promise to increase funding for key system-wide UN funds such as the CERF and the Millennium Development Goals Fund.

Questions are also raised by the leak about funding for individual UN agencies – likely to be those which the UK has traditionally supported like UNICEF and UNAIDS – and cynically earmarked for cuts under a category listed ‘unlikely to be noticed’ is support for the UN Peacebuilding Fund.

Oxfam has described the cuts proposals, if implemented, as:

As the flooding in Pakistan has tragically shown, we need more global and coordinated funding read and able to be swiftly and effectively deployed – not less – instead of needing to pass round the begging bowl every time, when every minute and hour is key.

And not just in Pakistan.

Equally tragic, but nowhere near the headlines, is the ongoing food crisis across the Sahel belt of West Africa where drought and erratic rains have caused failed harvests and water shortages, devastating the lives of people across Niger, Mali and Chad.

More than 10 million people are now affected by the crisis, seven million of those in Niger where hundreds of thousands of children face starvation.

Yet as Oxfam have shockingly reported, the UN World Food Programme (WFP) in Niger, the country worst-hit by the West Africa food crisis, has been forced to make an “agonising” decision to abandon plans to provide emergency food to families with children over the age of two because of a huge funding shortfall.

In government, I was proud to have worked on helping the UN improve its response to disasters, and that Labour campaigned for the CERF to be expanded from 50 million to 500 million dollars after the Tsunami and Darfur crises left the UN struggling to even start responding.

And as the likely impacts of climate change became apparent, we had pushed for it to double again to one billion dollars because of the increasing likelihood of a number of climate-change related disasters.

Climate change is another area in which commitments are rapidly being abandoned by this unprincipled coalition – with the same leaked document revealing that Mitchell has abandoned Labour’s pledge to ensure that additional funds were provided, and that no more than 10 per cent of the aid budget would be diverted to pay for tackling climate change, and its impacts such as climate related flooding.

Mitchell has so far refused to comment on the leaked drafts.

If he continues to do so, his words of concern about the ‘woeful’ international response to the Pakistan floods will sadly ring hollow.

He needs to tell the global humanitarian community urgently whether he plans to continue to strengthen this key emergency response mechanism, and other UN funds, or whether he plans to jettison them along with the other commitments listed in his dossier of cuts.

Dropping this pledge will only increase the likelihood of woeful responses to future Pakistans and Nigers.

And the cost will be measured in lives.