Business Secretary Vince Cable’s announcement this morning in support of a graduate tax today is an important milestone in the campaign for a fairer university funding system. 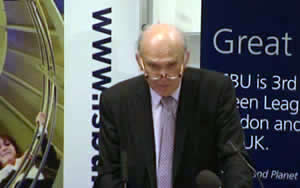 Business Secretary Vince Cable’s announcement this morning in support of a graduate tax today is an important milestone in the campaign for a fairer university funding system, but we will only celebrate when he has made good on his word and the unfair and regressive system of student fees has been consigned to history and replaced with a progressive alternative.

NUS has long supported, costed and advocated a progressive graduate contribution based on earnings after graduation as an alternative to the regressive market logic of tuition fees. Vince Cable is right to say that if the current system of top-up fees is a form of graduate tax, it is comparable to the poll tax.

Not only does it share key features of Thatcher’s disastrous levy, but it is also as deeply unpopular.

It is quite right for Dr Cable to ask why, under the current unpopular and regressive top-up fee system, a care worker or teacher is expected to pay for their education as much as a corporate lawyer or banker.

A fairer system would involve the abolition of sticker prices in prospectuses based on guesswork and their replacement with a contribution determined entirely by future earnings. This would end the very notion of tuition fee debt.

The fair solution is to abolish tuition fees and ensure that graduate contributions are based on actual earnings in the real world, rather than sticker prices in prospectuses, which are based on guesswork.

It is now crucial that the Business Secretary makes good on his stated priority of delivering a fairer funding system for students, and we will scrutinise and judge him, his department and the Government on that. It is quite clear that students and their families are not prepared to be treated as fools or conned by rebranding and marketing exercises.

A genuinely progressive graduate contribution has certain key features, and this will be the acid test of Dr Cable’s stated priority of ensuring students see the funding system as fair. We will hold him to it.

It is now incumbent on him as the Secretary of State in charge of universities to make good on his commitments, including that made in his manifesto to abolish fees, on the basis of which he was re-elected as an MP two months ago.

Where the Business Secretary is wrong is in suggesting that a fairer higher education funding system must come at the expense of cuts to university funding or student places, or both. At a time when we need more high level skills to speed the economic recovery, and when countries like France and the United States are investing in universities and students, it is both unfair and short-sighted to believe cuts will be in our long term interests.

Dr Cable is right that that greater flexibility is needed in higher education in combination with greater fairness, and this includes expanding the range of study options and modes. However, it would be wrong to force students to take two year degrees or to stay at home because they would not otherwise be able to afford the cost of university. The re-opening of a two tier system would not be in line with his stated aim of greater fairness for students.

The devil may very much be in the detail of what the Coalition Government eventually propose. What is clear is that Dr Cable was re-elected as an MP just two months ago having personally signed the NUS pledge to students and their families to vote against any rise in fees, and to work to introduce a fairer alternative, while the Liberal Democrats as a party have made much of their pledge to abolish tuition fees entirely.

Students and their families are not fools, and will not be conned by rebranding exercises or marketing drives, so we must now be clear – failure to meaningfully live up to these promises will simply not be tolerated and accordingly we will hold Dr Cable and the Coalition Government to account in the weeks and months ahead.

31 Responses to “Vince Cable: Friend of students or con artist?”