Whether they express their views in the élite language of economic or fiscal ‘unsustainability’ or the demotic of ‘welfare scoungers’, everyone apart from a handful of unreconstructed egalitarians seems to agree that welfare spending is too high. 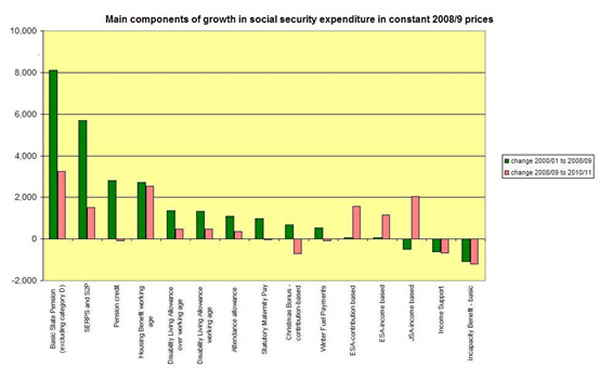 Whether they express their views in the élite language of economic or fiscal ‘unsustainability’ or the demotic of ‘welfare scoungers’, everyone apart from a handful of unreconstructed egalitarians seems to agree that welfare spending is too high. Not that anyone feels obliged to specify a level of spending that would not be too high: everyone knows that it’s going through the roof, and that’s all that matters.

As the Chief Secretary to the Treasury Danny Alexander put it recently:

“The welfare bill has ballooned by £60bn in 10 years. Failing to tackle this would make it impossible to deal with our debts without cutting essential services.”

Allowance made for the difficulty of getting complex messages across in newspaper opinion pieces, it has to be said that that £60 billion figure is a little too open to misinterpretation for comfort. It includes all expenditure on state pensions, pension credit and disability benefits to the retired as well as all tax credit expenditure: but it could easily be read as referring to the other kind of welfare, the one that everyone knows is too high, out-of-work benefits paid to working age adults.

Of the £60bn increase referred to by the chief secretary, less than a fifth will be accounted for by those benefits, and most of that is due to the massive rise in unemployment since the crash of 2008 – affecting spend on Jobseeker’s Allowance, housing benefit and the new Employment and Support Allowance. Only about 6 per cent of the figure is explained by increased spending on working age benefits prior to the crash.

The chart below shows the social security elements contributing to real terms growth in welfare spend over the last ten years, pre- and post crash (it doesn’t include tax credits):

Apart from housing benefit and disability living allowance, both targeted for arbitrary cuts in the budget, working age social security payments fell prior to the crash- and that includes spend on the much-maligned and much-misunderstood Incapacity Benefit caseload, which started falling mid-decade.

Even were it not so open to misintrepretation, Mr Alexander’s £60bn is the wrong sort of figure to be focussing on. A cash figure taken in isolation, even expressed in constant prices, tells us nothing about the economic or fiscal sustainability of welfare expenditure, because what is important to that question is the share of expenditure in total national output.

The chart below shows how welfare’s share of GDP has developed over the last 20 years; in this case, tax credits and child benefit are also included in the welfare figures: 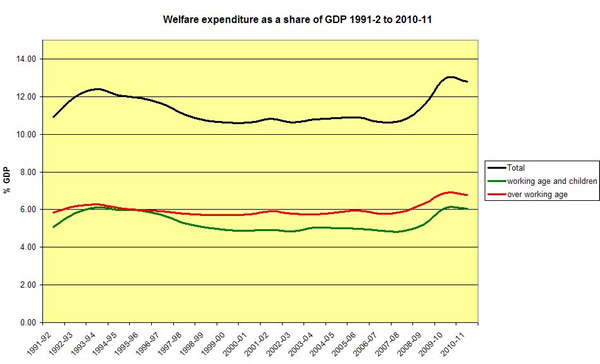 What it shows is not out of control growth but overwhelming stability. Welfare spending grew as a share of GDP during the early 1990s recession, fell in the mid-to-late 1990s and stabilised from 1998/9 to 2008/9. During that period, it never deviated more than .2 of a percentage point from its average of 10.7 per cent, slightly lower than in 1991-2.

It rose rapidly with the financial crisis, and on current projected figures was slightly higher in 2009/10 than at its previous peak in 1993/4. As visual inspection of the chart shows, this difference is entirely explained by expenditure on the retired. Working age and childrens’ welfare payments are at exactly the same point as at the earlier peak in welfare expenditure.

So despite population ageing, greater welfare generosity under Labour and a much deeper recession than that of the early 1990s, welfare expenditure has not ballooned, gone through the roof, exploded, hit unsustainable levels or whatever other glib phrase people want to use to describe what didn’t happen over the last ten years.

Is this good news? Obviously it’s not helpful if you’re trying to build the case for welfare cuts on claims about spending which fly in the face of the evidence. But for those who have no ideological investment in myths about welfare spending under Labour there may nonetheless be a downside to the paradoxical stability of welfare spending.

With the major increases in welfare generosity over the last ten years – particularly through tax credits – it’s hard to shake the feeling that welfare’s share of GDP spending ought to be higher than it is given current rates of unemployment. In fact, increases in generosity were largely directed at those with children and the retired.

The bill for Jobseeker’s Allowance, on the other hand, rose by about £2bn in 2008/9 prices during the recession: that is not a high price for accommodating a rise of more than 600,000 in claimant unemployment. Part of the explanation for the fact that welfare expenditure on working age adults isn’t higher now than it was in the early 1990s will lie in the continuing stinginess of payments to those without children – and they are going to get stingier as the shift to CPI uprating kicks in.

Those who are opposed to the Coalition’s more arbitrary and unfair welfare cuts need to see off the myth of ever-increasing welfare expenditure which is being used to justify them – but that might mean having to think the truly unthinkable and say the unsayable: we aren’t spending enough on welfare.

nb. ‘Welfare’ in the charts is the sum of DWP pensions and benefits, tax credits and child benefit. Because some departments other than DWP also pay benefits which are included in social security expenditure in official sources such as the FSBR and the Public Expenditure Statistical Analyses figures will not precisely match those in the official series