For many South Africans in the Soweto township and around the country, the World Cup has been a bonanza for the rich at the expense of the poor – and the tournament’s critics have not remained silent. 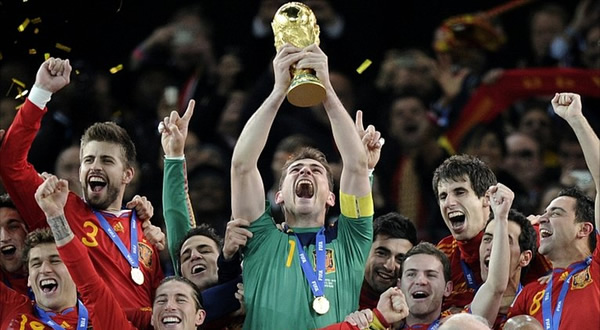 So, today, after a final encounter in Soweto’s Soccer City stadium, Spain bask in the glory of winning the World Cup for the first time.

But for many South Africans in the Soweto township and around the country, the tournament has been a bonanza for the rich at the expense of the poor – and the tournament’s critics have not remained silent. During its month-long span, communities have fought back against their exclusion from the FIFA competition. the Western Cape Anti-Eviction Campaign and the Anti-Privatisation Forum have spoken of the rising tide of resistance to what they see as a corporate invasion of their communities in the name of sport.

South Africa provides a stark example of the negative social impact of such global events. While the Pretoria government splashed out a staggering £3 billion to stage the Cup – the most ever spent by any host government – the country’s poorest communities have been shut out of any benefits that might accrue as a legacy from the tournament. Worse still, many have been adversely affected by direct assaults on their homes and their livelihoods, in a country which some reports now identify as the most unequal in the world.

Under pressure from FIFA, the South African government has cracked down on unlicensed vendors in and around the tournament stadiums. Thousands of informal traders who were counting on the World Cup to improve their life chances have been banned from these FIFA-imposed “exclusion zones”, and anyone caught selling goods marked “World Cup” or even “2010” without a licence risks arrest.

By contrast, FIFA has managed to secure tax-free bubbles for itself around key areas such as stadiums, media centres and even public viewing sites. Even before the first ball was kicked, FIFA had made a hefty £2bn on the tournament – the largest profit ever recorded in the run-up to a World Cup. Since South Africa was named tournament host, forced evictions have increased around stadiums, practice facilities and other tourist sites.

As reported by The Guardian, 15,000 people were removed from their homes around the England team’s training ground in Athlone to the infamous Blikkiesdorp camp miles outside Cape Town, while South Africa spent £400m at FIFA’s insistence on the brand new Green Point stadium, which will leave no legacy whatsoever to the people of the Western Cape; those who have been evicted have been offered no compensation for the livelihoods they lost along with their homes.

“Clearances” of poor or homeless communities have become commonplace in the run-up to colossal sporting events. Over 100,000 poor families have already been forcibly removed from their homes in Delhi in advance of the Commonwealth Games this October, and thousands more evictions look set to follow. Poor communities in the favelas of Rio de Janeiro are already being targeted in preparation for the 2014 World Cup and the 2016 Olympics to be held there.

Miloon Kothari, the former UN special rapporteur on the right to housing, has written a damning new report on the Commonwealth Games set for New Delhi. Kothari asked the question which goes to the heart of all mega sporting events: Which cities can truly afford to host these multi-billion dollar extravaganzas at a time of deep economic crisis and persistent poverty among their own populations?

With the 2012 Olympics coming ever nearer, London has its own story to tell. Activists involved in campaigns around the London games highlight the loss of jobs and businesses as a result of the forced removal of local firms and travellers’ settlements from the Olympic precincts. The enlightening Games Monitor website holds comprehensive information on this and other aspects of the games as they pertain to London and elsewhere.

Some communities choose to engage in outright resistance to huge sporting events in their localities, such as the coalition which fought against Chicago’s bid to host the 2016 Olympics; others are mobilising to reclaim the games for those most directly affected.

Yesterday also saw the final of the first Poor Peoples World Cup in South Africa, a free tournament open to all those who have been excluded from FIFA’s multi-billion dollar extravaganza. The tournament has brought surprising results from local teams that have taken on international identities for the duration. Somalia 3, Uruguay 0, for example, is not the sort of scoreline you’d expect in any other competition.

Maybe the world’s media should watch this alternative final outside FIFA’s corporate bubble. That way, the viewing public could get a glimpse of the social reality for those sections of South African society which have yet to taste the fruits of the victory over apartheid, 16 years on.

30 Responses to “Spain reign, but what impact has the World Cup left on South Africa?”