The media is again questioning the credibility of the Coalition’s only exit strategy. This is exactly what the Taliban who planned the attack will have hoped for. 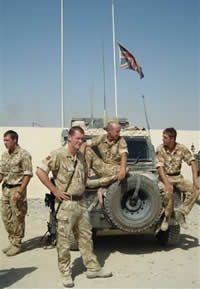 Additional reporting by Left Foot Forward’s Patrick Bury, a former captain in the Royal Irish regiment who has fought in Afghanistan

With the murder of three Gurkha soldiers by an Afghan National Army (ANA) counterpart and news last night of another British military fatality in Sangin, the media is again questioning the credibility of the Coalition’s only exit strategy. This is exactly what the Taliban who planned the attack will have hoped for.

While incidents like Tuesday morning’s are extremely rare, and British trainers do have increasing trust in the ANA’s capabilities, the death of comrades at the hands of a renegade Afghan soldier, unlike November’s murder of five British soldiers at the hands of the notoriously corrupt Afghan National Police (ANP), will raise some serious questions.

The first of these must be about the rapid expansion of the Afghan security forces and the ignorance of quality for quantity. In the race to expand the ANA and ANP, vetting procedures have not been rigorous enough, and this has had evidently deadly consequences.

Another question is that of payment. With ANA soldiers earning as little as $200 a month, soldiers who are constantly based on the frontline can easily be induced to turn rogue for financial reasons. Add to this religious and social pressures Afghan forces are subjected to and incidents of infrequent Coalition fratricide seem set to continue.

Meanwhile, in London, NATO secretary-general Anders Fogh Rasmussen provided the latest instalment of the public dispute amongst Western leaders about withdrawal from Afghanistan in his recent interview in The Daily Telegraph, criticising prime minister David Cameron’s declaration that Britain’s troops will be out of that country by 2015.

Rasmussen argued that the Taliban might increase the frequency and intensity of its attacks if it feels that the coalition’s will is weakening, and that a declared date of withdrawal will encourage the insurgents to simply wait NATO out.

This is essentially the same ground trod by defence secretary Liam Fox’s similar criticism of the deadline, and that underlay the outbursts that got former US commander Stanley McChrystal relieved of duty. General David Petraeus, now commander in Afghanistan, has attempted to walk the line between the two arguments by saying he agreed with the Obama Administration’s timeline to begin withdrawing troops in July 2011 and, at the same time, hinting that operations might take far longer than expected, a dichotomous position with which he has so far gotten away.

It is not entirely clear what Rasmussen hoped to achieve by his remarks. He was at pains to note that “the Taliban follow the political debate in troop-contributing countries closely”, which, presumably, would argue against exacerbating the withdrawal-timeline debate afresh. His point that setting an end-date in a battle of endurance risks conceding defeat is not without merit, but surely this could have been conveyed to Cameron privately.

Rasmussen also expressed concern that defence cuts in Europe could damage European/American interoperability, resulting in America someday finding the Transatlantic relationship “less relevant”. This echoes former security minister Sir Alan West’s 2007 complaint that the British armed forces were becoming a “tinpot gendarmerie”, but it does not take into account the fact that defence cuts are also on the agenda in the United States; indeed, the US has already cut one unilaterally applicable defence program – the F-22 Raptor – in favor of an interoperable system, the F-35 Joint Strike Fighter.

It would be of interest to know what Rasmussen would recommend as an alternative to the defence cuts he decries; surely he is not arguing that NATO would be better served by member-states with full defence budgets paid for by shredded critical services or taxes the population cannot afford? There is a serious question about the relevance not of the Transatlantic relationship as such, but of the kind of high-cost, Cold War-era interoperability Rasmussen fears will become impossible in the upcoming years of austerity, a question which he may yet be forced to answer.