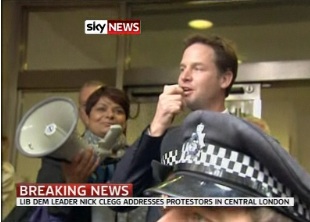 Several papers cover the news, broken by Left Foot Forward yesterday afternoon, that there will be a referendum on the Alternative Vote next May. The Guardian reports that the “coalition government is to test its unity” with the move. They also report that “Labour enthusiasm for the reform is wavering” but only quote leadership contender Andy Burnham and former MP, Nick Palmer. Both Miliband brothers have said they would support a “Yes” vote on AV.

The Labour party’s manifesto pledged to “hold a referendum on introducing the Alternative Vote for elections to the House of Commons.” The Daily Mail reports that, “Nick Clegg last night won his battle for a referendum on electoral reform next spring – but sparked a rift within the coalition Government.” The paper reveals that the move has angered Tory MPs who are “furious at the idea of Westminster’s system being torn up to appease a junior partner in the coalition.”

The Sun reports “[Lord] Guthrie’s attack over rift in No10” as the former chief of the defence staff “blasted the PM and his Defence Secretary over their Afghan war row as ‘not helpful’.” David Cameron and Defence Secretary Dr Liam Fox have publicly disagreed on whether there should be an end date for the conflict. Lord Guthrie told The Sun: “The Army doesn’t want a government that dithers. Soldiers in the field need to know the Government is totally supportive of what they’re trying to do – and a mixed message is not helpful.” The Guardian reports that “William Hague was forced to clarify the government’s thinking on Afghanistan when he declared that he would be ‘very surprised’ if Kabul’s military was unable to take the lead by 2014.” His statement reinforced David Cameron’s position and appeared to leave Liam Fox isolated. Fox had warned an early withdrawal of forces would act as “a shot in the arm to jihadists” across the world.”

The Guardian‘s front page reports that the “The life expectancy gap between rich and poor people in England is widening, despite years of government and NHS action”. The report by the National Audit Office shows that while life expectancy has risen generally, it is increasing at a slower rate for England’s poorest citizens. The gap in life expectancy between government-designated areas of high deprivation and the national average has continued to widen. The report criticises the Department of Health and the NHS for making too little progress to tackle this key barometer of inequality.

The Telegraph reports that “flagship academy schools are inflating their results by shunning academic qualifications”. The report – published in the Times Educational Supplement – said that 48 per cent of A* to C grades achieved in academies were actually in vocational qualifications instead of GCSEs. The paper says the disclosure will “cast fresh doubt on Government claims that academies outperform other secondaries.” The Coalition are planning a huge expansion in academies through its “free schools” policy.

The Financial Times‘ front page headline outlines that “Data raise fears over faltering economy” across large parts of the world. In Asia, manufacturing activity indices for China, South Korea, Taiwan, India and Australia all showed weaker activity for June. In the UK, the purchasing managers’ index for manufacturing remained close to a 15-year high in June but showed growth in exports was slowing sharply as a result of economic uncertainty in the eurozone and the recent appreciation of the pound against the euro. The FT reminds its readers that, “The G20 meeting in Toronto last month was marked by concern that too-rapid fiscal tightening would deprive the global economy of much-needed domestic demand”.