Mobile devices and the political system have had a surprisingly long history, from waist-band mounted pagers being an essential accessory of MPs during the Blair years to mobile phone voting being trialled successfully in Sheffield in 2002 for local elections. 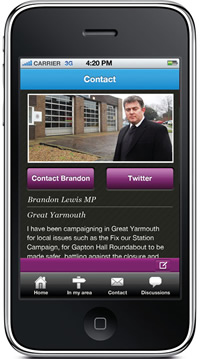 Mobile devices and the political system have had a surprisingly long history, from waist-band mounted pagers being an essential accessory of MPs during the Blair years to mobile phone voting being trialled successfully in Sheffield in 2002 for local elections. This was considered by former chairman of O2 David Varney “to work best in poorer areas, where there is a high percentage of pay-as-you-go mobile phone users. It also seems to work best among young people”.

The Finnish parliament had pioneered providing mobile email to MPs through national champion Nokia in order to keep constituents and their parliamentary representatives better connected. More recently in the UK iPhones were popularised in Westminster by early adopter David Davis (at the time, the shadow home secretary), alongside the dominant Blackberry device.

In 2010, mobile devices have become ubiquitous so efforts to improve the visibility and transparency of politics using mobile technology has got to be a progressive move. MyMP by Public Zone and the National Endowment for Science, Technology and the Arts (NESTA) is an interesting way of moving this concept forward in 2010.

The service had been piloted by Derek Wyatt just prior to the election and has since been rolled out to a wider tranche of MPs. The idea is that the MyMP application makes the MP’s activity and location (for surgeries etc) immediately accessible and brings a greater degree of transparency to political representation.

A particularly interesting feature is the ability to poll the opinions of those constituents who have downloaded the application. The application will continue to be free for constituents to download and charge MPs a small service charge to fund ongoing costs and maintenance.

The application is an admirable move towards a more transparent and hopefully inclusive democratic process. In order to move it further along in a progressive direction Left Foot Forward has some suggestions:

• Move beyond the iPhone – Whilst one in seven of the UK population owning a smartphone and the iPhone being just a fraction of that figure, a more device-agnostic approach would allow for even greater inclusion. In addition, government ministers are only allowed Blackberry devices at the moment as iPhones haven’t been approved by government IT boffins;

• Make it compulsory rather than an opt-in process for MPs – MPs who aren’t interested in being truly representative of their constituents currently don’t have to use the MyMP service if they don’t want to; and

• Make it a game – Location-based service Foursquare has managed to build up a database of venues around the world by using consumer-submitted check-ins. This service was driven by ‘game play’ where participants could earn points, see how they compared to peers and earn badges. How could this process be used to improve the frequency and quality of MP data? Could the ‘game’ create a league table of MP transparency?

Find out if your MP has their own application at MyMP