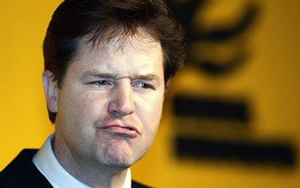 Additional research by Maria Arbiter of the Fabian Society

The Liberal Democrats will be the party most affected by the cut in the number of seats announced by Nick Clegg on Monday, research undertaken by Left Foot Forward reveals. In his statement on constitutional and political reform, in which he confirmed the news broken by Left Foot Forward a week ago, that a referendum of electoral reform would be held on May 5th next year, the deputy prime minister unveiled plans for a boundary review – resulting in the loss of 50 MPs.

More than 40 per cent of Lib Dem seats (23 out of 57) are isolated, surrounded entirely by seats of opposing parties – including Mr Clegg’s Sheffield Hallam constituency – while his Coalition partners are the least likely to be affected: just 1.3 per cent of Tory seats (4 out of 307) are isolated. For Labour, the figure is 4.7 per cent (12 out of 258).

As a consequence of the boundary review, some seats will stay the same size while others will get much larger, which we haven’t accounted for. On a uniform enlargement, however, it is clear the Liberal Democrats stand to be affected the most from enlarging constituencies to take in areas of non-Lib Dem held seats.

While it has been suggested by some that Labour’s opposition to the propsed changes is purely cynical, there are many principle reasons for opposing these particular reforms, one of them being that cutting the number of MPs would do nothing to improve proportionality, as explained below.

During the writing of the Jenkins ‘Commission on the Voting System,’ Dr. David Butler, the eminent psephologist, was asked to convene a group of academics – including Vernon Bogdanor, John Curtice, and Patrick Dunleavy – to consider a series of questions including, “Can deviation from proportionality under the current system be corrected to any significant degree by changing the criteria for redrawing constituency boundaries?”

“The principal sources of disproportionality have nothing to do with boundary-drawing or the detailed statutory rules which the Boundary Commissioners have to apply. Changes in these rules would do very little to make results more proportional…

“In general, no significant reduction in disproportionality can be expected from further action to improve the workings of FPTP.”

The Butler discussion also looked at ‘bias‘ which has swung from the Conservatives in the 1950s and 1960s to Labour in recent years. They outlined a number of solutions, including “more frequent drawing of boundaries” but concluded that:

“All of these policies would be likely to prove controversial. In any event only a limited net difference could possibly result from pursuing these approaches. They could not cure the disproportionality of the sort experienced by the SNP and the Liberal Democrats.”

More recently, the Independent recently cited new research at the University of Plymouth :

“The geography of each party’s support base is much more important, so changes in the redistribution procedure are unlikely to have a substantial impact and remove the significant disadvantage currently suffered by the Conservative Party.”