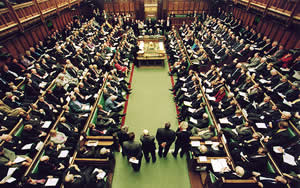 Additional research by Maria Arbiter of the Fabian Society

Indeed, the only times the Westminster parliament has run to five years have been when the Government has been in trouble. These were in 1945-50: sterling crisis; 1959-64: Harold Macmillan’s resignation; 1987-92: Mrs Thatcher’s resignation and John Major’s early days; 1992-97: Major’s resignation and reinstatement; 2005-10: financial crash.

However, Luxembourg, Italy, France, Cyprus and the European Parliament all have five year fixed terms, with the US House of Representatives at the other end of the spectrum, facing election every two years. In Britain, though, the Scottish, Welsh and Northern Irish devolved bodies all have four year terms, as does the London Assembly.

In a pre-election briefing on fixed term parliaments, the UCL Constitution Unit explained:

Many legislatures have fixed terms, including most Western European states, the US, and the EU. Fixed terms are increasingly being introduced in other Westminster systems. In the last ten years most of the Australian states have introduced fixed terms, although the federal legislature does not.

Canada has fixed-term parliaments in most of its provinces and at the federal level. Safety valves are either legislated for, or are provided by constitutional conventions of no confidence motions leading to dissolution. While these innovations have not had time to be properly tested, no major problems have arisen so far.

The exception is Canada at the federal level, which introduced fixed-term parliaments in 2007. The aim was to stabilise government during a period of frequent minority governments, and to remove the government’s unfair advantage in choosing the timing of the election. The law did not alter the Governor General’s reserve power to dissolve parliament, which would have required a constitutional amendment.

A year later the Prime Minister sought a dissolution one year before the end of the fixed term, when his party’s poll ratings had temporarily
increased. The Governor General, relying on her reserve powers, granted Harper’s request. In practice, it seems that the Canadian law only fixes the maximum term, leaving the Prime Minister free to call an election at other times.

Both the Scottish Parliament and the Welsh Assembly have fixed terms with a safety valve. If at least two-thirds of the members vote for dissolution, or if the parliament fails to nominate one of its members to be First Minister, the speaker proposes a date for an extraordinary general election and the legislature is dissolved.

Earlier this month, Left Foot Forward welcomed the Coalition’s u-turn on the 55 per cent dissolution figure; as before, only a simple majority will be required to no-confidence the Government and trigger an election unless a viable government can be formed within 14 days of the vote – an essential “safety valve”, to use the terminology above – and a safeguard against ‘zombie’ governments.

• There is more on fixed-term Parliaments in an LFF briefing paper, prepared by the UCL Constitution Unit, here.