As the Labour Leadership race gathers pace evidence is emerging that the alternative vote system is favouring Ed Miliband. 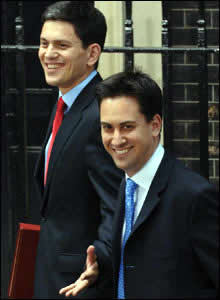 As the Labour Leadership race gathers pace with more constituency parties and affiliated organisations announcing their support every day, evidence is emerging that the alternative vote system is favouring Ed Miliband. The details behind the results from the Socialist Health Association support the view that Ed Miliband is a unifying figure in the party.

In the first round Ed led with 38 votes, followed by Diane Abbott on 32, David Miliband on 29, Andy Burnham on 22 and Ed Balls (who failed to submit a requested manifesto on health) on six.

After Balls and Burnham had been eliminated and their second preferences redistributed, Ed Miliband remained in the lead with 49 votes, followed by David Miliband on 37 and Abbott on 34. Ed’s lead over his brother then jumped from 12 to 23 votes when Abbott’s votes were redistributed.

Ed secured more than double the number of Diane’s second preferences compared to his brother. However, David Miliband is leading the pack in terms of constituency labour party nominations. He currently has 56 local parties backing him, with Ed Miliband on 46, Burnham on 14, Abbott on 11 and Balls on 5.

Meanwhile, in an interview today Ed again described himself as one of the ‘least tribal’ politicians in New Labour. As Left Foot Forward reported yesterday, all the candidates have been laying out their pitch to the BBC. Though part of Brown’s inner circle, Miliband was thought of as a constructive communicator with the Blair camp, rather than a destructive briefer.

This is in contrast to Ed Ball’s reputation, which he vehemently denies, of undermining fellow cabinet members.

In the interview, Ed Miliband describes his positions on inequality and restructuring the banks not just as appealing to the labour grass-roots, but as in tune with public opinion:

This is where I have a problem with some of what New Labour did, because we got stuck in our own orthodoxies and dogmas.”

The final interview in the series, with Diane Abbott, will be broadcast tomorrow on the BBC News Channel at midday.

Update 1530 The Ed Miliband campaign has received a big boost today with the news that the GMB union will nominate him for leader. The central executive council will call on all members to back Ed when they vote on a one member one vote basis.