Diane Abbott has hit out at rivals for the Labour Party leadership, calling them "geeky young men in suits", accusing them of "pretending they weren't there" at the heart of Government. 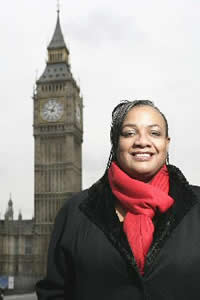 Diane Abbott has hit out at rivals for the Labour Party leadership, calling them “geeky young men in suits”, accusing them of “pretending they weren’t there” at the heart of Government – finding it “amazing” some of them were now seeking to distance themselves from policies like Iraq – and saying that if Ed Balls wasn’t behind the briefings against Tony Blair it must have been his “evil twin brother”.

Abbott’s explosive interview is the last in the series of interviews with the leadership candidates on the BBC News Channel with Laura Kuenssberg. She says of Ed Balls, Andy Burnham, David Miliband and Ed Miliband:

“It’s difficult to see how we can move on from the era that Mandelson symbolises if we select someone who was in to it up their neck.”

“We’re not going to be able to engage with society and particularly engage young people in politics, if they see the political class as a cast apart, a strange sort of geeky young men in suits…

“The other reason why i’m the best candidate, is on policy, I’m the most consistent, I haven’t discovered in the last couple of months that I was against the Iraq war.“

Last night Ed Balls appeared on This Week, denying all allegations – made by Lord Mandelson, Alistair Campbell and Andrew Ransley amongst others – of briefing against Mr Blair, reiterating his remarks on Tuesday that it was “total, absolute nonsense” that he had been the ringleader of the September 2006 coup against the former prime minister.