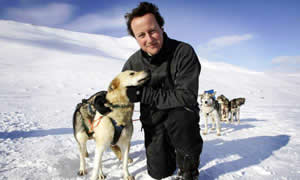 On his first day in office David Cameron promised “the greenest government ever”, having told the electorate to “vote blue to go green”. Just yesterday, climate change secretary Chris Huhne wrote an op-ed in the Financial Times calling for Europe to raise its climate ambition and toughen up its 2020 carbon target.

Meanwhile, also yesterday, the Treasury announced it was shelving the green investment plan which would see some state assets sold to generate money for clean energy funds.

And today the Financial Times reports that the Department of Energy and Climate Change (DECC) has made a further cut of £85 million – including £34m that would have gone to clean energy business programmes.

In what appears to be a cynical ploy, the government have announced the cuts just a few days before their independent advisers on how to build a low carbon economy, the Committee on Climate Change, are expected to call for clean energy funding to be maintained or increased.

As the FT reports:

“The £85m cuts… will fall as the Climate Change Committee, the statutory body that advises on emissions, prepares to report that funding levels for business support should be safeguarded.”

The Department have made the following cuts today:

• The Carbon Trust will receive a £12.6 million cut to this year’s grant for low carbon technology and business support funding;

• £6.1 million from “programme budgets within DECC”;

• The department will cut £1 million from funding for development of deep geothermal energy generation;

• They have cut £3 million from the Offshore Wind Capital Grants Scheme;

• They will close the Energy Saving Trust technology trials, cutting £700,000 from the £3 million pound programme; and

• They will reducing the scope of the Central Government Low Carbon Technology Programme by cutting £2.9 million.

“Cameron’s promises of this Government being the greenest ever are beginning to crumble in the light of the Department of Energy and Climate Change cuts.

“We have the opportunity to grasp the industries of tomorrow in renewable energy, electric vehicles and energy-efficient business but we need Government action not words.”

“The government is cutting support for green jobs and green industries at exactly the time we need it most. They have no plan for economic growth, just cuts.

“On the one hand Chris Huhne calls for a clean energy revolution but with the other he is taking away vital support that Labour delivered for green jobs and green industry.

“On the one hand they call for tough carbon emissions targets but with the other they take away the means to achieve these targets.

“Climate change is the ultimate market failure and requires active government to shift our economy towards growth where the planet no longer pays the price. Instead this coalition have turned their backs on green industry. They have shown their true colours today.”

“Yes, David Cameron hugged the huskies in opposition. But as soon as he got into government, he walked them into the Downing Street garden, and shot them in the head.”