A proper response to 7/7 must be to bring the alienated and angry young men of Britain, whether seduced by Al Qaeda, the BNP or football hooliganism, into society. Only then can we have social cohesion and only this is true counter-terrorism. 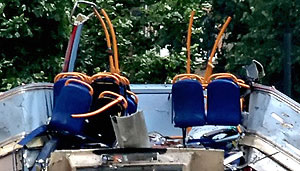 In the wake of the July 7th terror attacks of five years ago many awkward questions were levelled at the Muslim community in the UK and a link was established between the bombers and Al Qaeda.

The evidence for this link is the fact that Al Jazeera reported the videotaped suicide note of bomber Mohammed Sidique Khan as having come from Al Qaeda. Likewise Khan made references to Al Qaeda leaders and used the language of Al Qaeda, calling himself a ‘soldier’ and asking to enter ‘the garden of paradise’. And so, here, the debate about July 7th ended.

The events of that day, with this evidence, could be cleanly fitted into the prevailing dialogue about ‘radical Islam’. July 7th became a tragic reminder of why we are fighting in Afghanistan, another example of Samuel Huntington’s ‘Clash of Civilisations’ and a classic case of terrorism trying to undermine democracy and freedom.

What lies beyond the political rhetoric though, and the casual employment of such easy categorisations as ‘terrorism’, ‘freedom’ and ‘radical Islam’?

Al Qaeda is now widely recognised as being less an organisation, more a franchise, a brand. It is true Khan travelled to Pakistan, and he was probably given the authority to carry out the attacks in the name of the Al Qaeda brand but does this mean Al Qaeda attacked the UK?

This dominant hegemony misses the real lessons of July 7th.

Beyond Islam the bombers were unified by many other demographic factors. They were all young men, from minority communities whose experience of Britain was that of working class life in the North. This is far more important than their religious inclinations.

For many people in the communities that the bombers come from, of all creeds, colours and religions, Britain remains a closed shop and a place of limited opportunity. A number of recent reports have shown that inequalities of wealth and mobility persist and linger, such as these two, reported by The Guardian. Dewsbury, from where several of the bombers hailed, is a place of deprivation and poverty.

It is a town a million miles away from the corridors of power, from the media. It is a place familiar to many people, up and down the land, who feel a genuine alienation from the political process and legitimate routes to empowerment. Parallels between radical Islam and the BNP seem counterintuitive but, as shown by this article about the far right, the emotions that underpin extremism are common to all communities.

Jamie Bartlett from Demos explains today how a more meritocratic society, of greater opportunity and mobility, where there are more avenues through which political grievance can be expressed leads to a net reduction in radicalisation and the subsequent violence.

There can never be any excuse for the horrific and barbaric actions of the July 7th bombers. To focus on Islam though, and the dynamics of international politics is to ignore the more difficult questions. What drove some ordinary men from Yorkshire to declare Jihad on their own country? What fostered such intense anger and alienation, so easily exploited by extremists?

The sad fact is that the people of Dewsbury, and numerous communities like it, will probably never read this article. A proper response to 7/7 must be to bring the alienated and angry young men of Britain, whether seduced by Al Qaeda, the BNP or football hooliganism, into society. Only then can we have social cohesion and only this is true counter-terrorism.