Justice secretary Ken Clarke hinted at a possible Conservative u-turn on prisons policy this morning, and said fear of crime was out of kilter with the "extent" of crime. 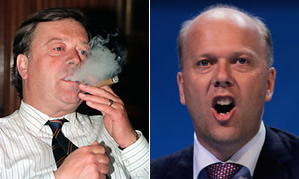 Justice secretary Ken Clarke hinted at a possible Conservative u-turn on prisons policy this morning, questioning the need for tougher sentencing and suggesting millions could be saved from the £2.2billion prisons budget by locking up fewer offenders and reducing sentences – and then went on to contradict much of the pre-election Tory scaremongering by saying the public feared crime “to a greater extent than they actually face it”.

Mr Clarke’s remarks appear to be both an admission that crime is falling – contrary to everything the former shadow home secretary Chris Grayling said during the election campaign – and an admission that prison sentencing needs reforming.

Left Foot Forward has consistently highlighted the falling crime figures, and Grayling’s unwillingness to accept them. Both main measures of crime, the British Crime Survey and police recorded crime, showed declines in violent crime since 1997, and more recently, a third measure, hospital accident and emergency violence-related admissions, was also down.

Mr Grayling even produced a study which purported to show violent crime up 44 per cent – though he has never released full details of this ‘study’ to the public. He had also appeared on the Today programme claiming there had been a “98 per cent increase in serious violent crime” – the true figure is a 50 per cent fall in violent crime since 1995.

On prison sentencing, Left Foot Forward published an article from the Prison Reform Trust in May highlighting the fact that “60 per cent of short term prisoners re-offend within a year… costing the country between £7 billion and £10 billion a year”.

• Around 60,000 prisoners are jailed for less than twelve months each year costing taxpayers £300 million. Mostly convicted of theft and minor violent crimes, they make up nearly one in ten prisoners in England and Wales;

• Overcrowding means that despite having an average of 16 convictions each, little is done to tackle their reoffending;

• Activities for prisoners are “inadequate” and prison bosses know little about how well the schemes they do run work;

• Many inmates arrive, and leave prison homeless, unemployed and addicted to drugs or alcohol; and

• Most spend as few as 45 days inside, and are released automatically at the halfway point of their sentence. In that time they are not given “appropriate assistance” to help them turn around their lives.

If the new justice secretary bins the pre-election Tory rhetoric and bases future policy on evidence not prejudice, on actual statistics not invented ones, and by being honest and not fearmongering, this may be one policy area in which the Coalition is praised by progressives.