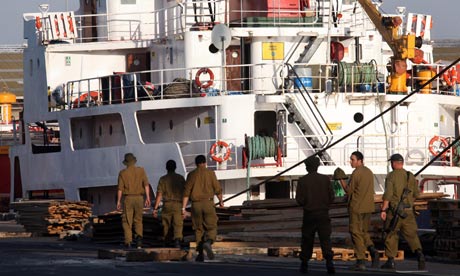 Want to receive this summary in your inbox before 9am every morning? Sign up here.

The Guardian‘s front page outlines that, “Pressure builds on Israel for full inquiry into Gaza flotilla deaths”. After 10 hours of deliberation, the UN security council called for a prompt, impartial, credible and transparent investigation conforming to international standards. Britain’s foreign secretary, William Hague, said: “We agree with our EU and other international partners that there must be a full and impartial and independent investigation or inquiry into these events.” Deputy Prime Minister, Nick Clegg, told the Today programme that maintaining the blockade was “not in Israel’s long-term self-interest”.

The Financial Times outlines that Israel is coming under “mounting pressure to lift its blockade of Gaza” yesterday as another ship headed to the area and the UN demanded an investigation into the deaths of pro-Palestinian activists.” The Mirror‘s front page says, “42 Brits seized by Israelis” and reports that, “None of the Britons on board were killed – but one is believed to be among up to 25 people wounded after troops stormed the ships in the Mediterranean.” The Times reports that, “First British Gaza activist returns home”. Hasan Nowarah, from Glasgow, told Sky News, “All you could see was screaming and bullets. Out of the blue as I looked around our ship, all I could see were … hundreds of Zodiacs full of soldiers.”

The Guardian reports that Alistair Darling will back David Miliband in the Labour leadership contest. Darling said he “believed strongly” the former foreign secretary was the right choice to lead Labour “for opposition and then back to power”, in a period he described as crucial for the party. The Daily Mirror calls it a “heavyweight endorsement” and outlines that in a letter to his Edinburgh constituency party, Mr Darling wrote: “He has the ability to inspire the party with a compelling vision for the future, returning to our roots as a social movement for change … He will re-engage Labour with the public, particularly those with whom we have lost touch.” The Times recap on Ed Miliband’s interview in Monday’s Guardian where he went on the attack on the Lib Dems for “betraying” those who voted for them at the last election.

A new ComRes poll for the Independent finds that 65 per cent of voters agreed that it was “difficult to know what the Liberal Democrats stand for”. The sentiment was shared by 56 per cent of the people who voted Liberal Democrat in last month’s general election. Only 78 per cent of people who voted Liberal Democrat last month said they would vote the same way if another election was held tomorrow; 17 per cent said they would support Labour instead. There was overwhelming support for the suggestion that first-past-the-post voting for Westminster should be replaced by a “system that reflects more accurately the proportion of votes cast for each party”, with 78 per cent agreeing and just 18 per cent disagreeing.

The Telegraph‘s front page reports that the National Institute for health and Clinical Excellence (Nice) has recommended a minimum national price per unit of alcohol among a series of measures to reduce alcohol consumption. But Health Secretary Andrew Lansley told Sky News that while he agreed that “price is important” in alcohol supply, “I personally have an issue with the question of setting a minimum price.” He told the Telegraph, “it is not clear that the [NICE] research examines specifically the regressive effect on low income families, or proves conclusively that it is the best way to impact price in order to impact demand.” The report also recommended a possible ban on all alcohol advertising in order to protect children; reducing how much alcohol travellers are allowed to bring into the country from abroad; reducing alcohol licensing hours at pubs, clubs and off-licences; and regular questioning from GPs about alcohol consumption levels.

The Times reports that Lord Ashdown is “being championed by the Government for a return to frontline international politics as EU envoy to the Balkans”. The paper reports that the former Lib Dem leader is close to both William Hague, the Foreign Secretary, and Baroness Ashton of Upholland, the EU’s foreign minister and Labour peer. The job would involve drawing up and implementing a plan for the EU accession of the Balkan nations – including Bosnia, Serbia, Macedonia, Montenegro, Albania and Kosovo. Croatia is already on the path to EU membership and expected to join next year while Slovenia is already a member. The Daily Telegraph reports that Ashton and Hague will discuss the appointment at a “dinner in London” but that the candidature “has already run into opposition from Germany”.