At the New Statesman hustings last night, the most lively, passionate, interesting and important exchanges came during the question on immigration. 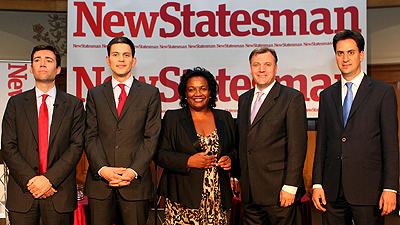 At the New Statesman hustings last night, the most lively, passionate, interesting and important exchanges came during the question on immigration. The candidates could have spent the whole night debating it and the audience would have been better informed about who has what it takes to lead Labour back to Government, had they have had the chance.

Instead, the obligatory Iraq question and two questions guaranteed by the sponsors of the event (Trident from CND and the alternative vote from the Campaign for Electoral Reform) ate up the clock.

Diane Abbott’s vocal and passionate cheering squad was joined by the rest of the audience when she demanded that Labour’s leaders ignore opinion polls and “hold the line”. She argued that leadership is about knowing when to follow public opinion and knowing when to lead it.

She said she doesn’t care how many voters raise the issue, Labour simply has to “hold the line”. It was the biggest cheer and the longest applause of the night.

She proudly declared that it wasn’t an issue in Hackney. Is that because of her political leadership? Possibly. Or is it because Hackney has diverse communities and is comfortable with metropolitan multiculturalism? But her more profound comment came when she asserted that anxiety about immigration “is a proxy for angst about housing and jobs for the working class”.

Research published by Demos shows that in 1997 just 5 per cent of people saw immigration as one of the major issues facing Britain but by 2006 40 per cent did. Before the last election, three-quarters of the country saw it as a problem and over half the voters Labour lost since 2005 say it is one of the most important issues facing the country. But at the same time, nearly three fifths of voters disagree with the statement “I would rather live in an area where people are from the same ethnic background as me”.

David Miliband rightly identified it as a fairness issue not a race issue, saying that “Punjabis are complaining about Polish immigrants”. Abbot and Ed Miliband both identify it as a class issue. All three of them are themselves children of migrants.

Ed Balls said the issue was about the pace of immigration from eastern Europe. He defended his call for transitional controls on the free moment of workers as a pro-European position, necessary to maintain support for European integration. But David Miliband told Ed Balls that Turkey isn’t ready to enter the EU and that ‘British jobs for British workers’ was a mistake. Andy Burnham said British workers had benefited from free moment and if you’ve ever had egg and chips washed down with Guinness at the Dog and Duck pub on the Costa de Sol, you will know what he means.

Ed Miliband said the issue was one of class and repeated his call for a nationwide living wage. Andy Burnham said migrants shouldn’t be able to send child benefit claimed in the UK back to their countries of origin. Every candidate agreed that the Labour Government had dragged its feet on the Agency Workers Directive.

It was fascinating, thought provoking, issues-driven and policy relevant debate that is politically vital for Labour to get sorted out. This is the debate that the Left needs to resolve and the issues that Jon Cruddas was raising in the 2007 deputy leadership contest, only for them to get brushed under the carpet.

Labour’s leadership election needs to be about policy issues and big ideas, not just about values and character. The left needs an open debate about our direction and it began last night, with candidates showing leadership and disagreeing on policy, not personality.

12 Responses to “Leadership race comes alive with debate on immigration”