An analysis published this week by the Green Alliance and the Policy Studies Institute argues there would be economic, environmental and equity benefits if the Government got rid of aviation tax breaks. 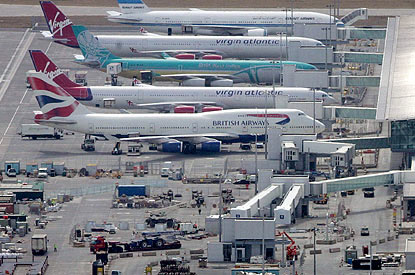 The Government could raise an additional £2.5 billion a year by 2013 if the tax breaks enjoyed by aviation were tackled.  An analysis published last week by the Green Alliance and the Policy Studies Institute argues there would be economic, environmental and equity benefits if the Government got rid of these tax breaks.  According to Treasury estimates, if aviation fuel was taxed at the same rate as road fuel, the Exchequer would raise £6.5 billion a year. An additional £3.5 billion could be raised if the VAT exemption on air tickets and the purchase of aircraft equipment was abolished.

It would be difficult for the Government to take unilateral action to abolish many of these exemptions directly, particularly on tax-free fuel, because of international agreements. But it could use its proposed new Plane Tax as an indirect way of raising the money.  The Green Alliance argues that the money raised could be used to reduce income tax and support economic growth.  It says that £2.5 billion is the equivalent to the cost of reducing the employees’ National Insurance contributions by over 0.5%.

A fairer level of taxation would almost certainly lead to higher air fares.  This would, though, merely redress the balance of recent years where, because of the tax-breaks, demand for air travel has been artificially stimulated. Higher fares would reduce the growth in air travel.  That would go some way towards the UK having any chance of meeting its CO2 emissions target.  The soaraway growth in air travel threatened to drive a jumbo jet through these targets.  It will also ease the burden on other sectors of the economy which have been faced with cutting their emissions drastically in order to compensate for the rising emissions from the aviation sector.

•the extra tax increase for short-haul flights would be around £25 per passenger.

•For longer haul flights it would be greater as the tax with the distance flown.

And the equity benefits could be significant.  What worries the really poorest people in the UK when they wake up each morning is not whether they can afford a weekend in Paris or Rome, but the cost of clothes for their children, the rising price of bus fares and the prospect of increased heating bills.  Their quality of life doesn’t revolve around a flight to the Agean each year but effective sound insulation in their homes, somewhere safe for their children to play and easy access for their disabled parents to local facilities.  Taxation on aviation which helped pay for some of these things would be progressive.  The current tax-breaks are regressive. They are of most benefit to the people who fly the most:  the top 10% of income earners.

The abolition of aviation’s tax-breaks would also send an important signal about the Government’s willingness to move in the direction of green taxes.  While in opposition, the Conservatives talked about the need for ‘eco-taxes’: where the tax burden on polluters is increased but it is relaxed in other areas of the economy.  The Plane Tax gives the Government an early opportunity to move in this direction.

The new research from the Green Alliance and the Policy Studies institute can also provide useful ammunition for politicians on the left as they reassess their thinking on aviation.  Towards the end of the Brown Government it was becoming painfully clear that such a reassessment was long overdue.  Labour had become the party defending the privileged position of one of the most problematic industries on the planet.  The contenders for the Labour leadership should use this new research to help formulate a new policy on aviation that is both more equitable and sustainable and is much more relevant to the economic needs of the 21st Century.