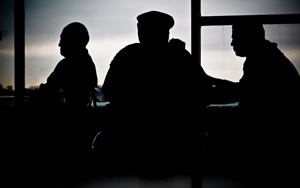 UKIP yesterday hosted a conference at the European Parliament with Russian conspiracy theorist Daniel Estulin and Italian extremist Mario Borghezio speaking alongside Nigel Farage and Godfrey Bloom, to discuss the Bilderberg conspiracy, about which Estulin has written a book.

The Bilderberg conspiracy has been propagated by hardline right-wingers and libertarians, who accuse it of being a “liberal Zionist plot”. The BBC reports that:

“In Yugoslavia, leading Serbs have blamed Bilderberg for triggering the war which led to the downfall of Slobodan Milosevic.

“The Oklahoma City bomber Timothy McVeigh, the London nail-bomber David Copeland and Osama Bin Laden are all said to have bought into the theory that Bilderberg pulls the strings with which national governments dance.”

Borghezio is a Lega Nord MEP for North-West Italy, and sits alongside UKIP in the ‘Europe of freedom and democracy’ group. In July 2005, Borghezio was convicted of setting fire to the pallets of some immigrants while they were sleeping under a bridge in Turin.

“According to Searchlight magazine, in 2008 he was invited to speak at an ‘Anti-Islamisation Congress’ staged by the German fascist pro Köln (pK) organisation to discuss ‘the foreign infiltration of our cities’.

“Nick Griffin had been on the guest list but after German anti-fascists, with help from Searchlight, published his comments denying the Holocaust, his name was withdrawn. Jean-Marie Le Pen was also billed but he denied he was attending.”

Recently, the conspiracy theorists have turned their minds to the new British government and opposition; they actually believe that:

“While David Cameron’s new coalition government in the United Kingdom has opposed the expansion of Bilderberg’s European project in rhetoric, they have been busy appointing pro-Euro politicians to influential posts.

“The possible attendance of Cameron and his new sidekick Nick Clegg will be interesting to watch, as will the question of whether any members of the ousted UK Labour Party are invited.

“With leadership elections imminent after the resignation of dutiful Bilderberg servant Gordon Brown, Bilderberg will be keen to vet potential future Prime Ministers such as David Milliband.”

“Farage is trying to shed light on this shadowy conspiracy and free us all. Oh, what I’d do to be able to attend this press conference and ask a few questions…”

8 Responses to “Farage and the far-Right conspiracy theorists”