The Tories and Lib Dems have just condemned 50,000 children to continue a life in poverty with their decision not to extend free school meals to 500,000 of the poorest families. 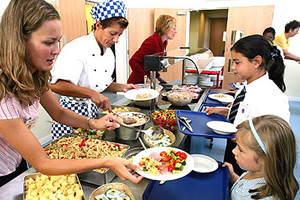 Our guest writer is Cllr Richard Watts, executive councillor for children and young people in Islington, where Labour introduced free school meals for all primary school children; he used to run the Children’s Food Campaign

Just before the election, George Osborne said this about the cuts he was planning to public services:

“The promise is absolutely explicit. We will protect the frontline, we are looking at waste, inefficiency and that is what is has to go in the coming year. I will not accept frontline cuts.”

Yesterday the Tories and Lib Dems announced that they were scrapping Labour’s plans to give 500,000 children from the lowest paid families free school meals.

This scheme, by itself, would have lifted 50,000 children out of poverty. Some of the poorest families – many under the official poverty line – will now have to pay up to £600 more to give their children a decent lunch. This is the equivalent of an extra penny in income tax per child for them.

The Child Poverty Action Group described itself as “stunned” by the move; it will be interesting to see Michael Gove and former Islington Lib Dem councillor Sarah Tether explaining how this isn’t a savage cut to front line services.

Islington Labour’s campaign to introduce free school meals was a key part of our winning local election campaign and we will stick to our promise to introduce them, despite the Government taking away £1.6 million that the Labour Government had allocated to the borough to help with the costs.

Good quality school meals help improve children’s health, behaviour and learning. The difference in the quality of lunch that affluent children eat, compared to their less well off peers is, in my view, one of the main explanations for why school results are so predictably, and depressingly, correlated with income.

When children do not eat a school lunch, the lucky ones get a packed lunch (a study by the School Food Trust found only 1 in 100 met the basic nutritional criteria that all school meals must meet) while the unlucky children get a small amount of money to spend in a local shop.

The Tories and Lib Dems profess that they want to make work pay, but have just imposed another financial burden on parents wanting to get back into the labour market. Having to pay for school meals as soon as they get a job means the poverty trap has been made that bit deeper for many parents.

It took Labour too long to recognise the importance of school food. But in the end the previous government had enormously increased the quality of school food, trailed free school meals for all and extended the number of people eligible for free school meals everywhere else. If they had been allowed to continue, these changes would most have really helped our least well off children to do better at school.

In contrast the Tories and Lib Dems have just condemned 50,000 children to continue a life in poverty, made it more difficult for struggling parents to keep their children healthy and exacerbated the poverty trap into the bargain.