Labour leadership candidate David Miliband set out his vision of a "genuinely comprehensive education" at a school in Bristol today, speaking of his "brazenly aspirational" goal of inspiring a love of learning in children. 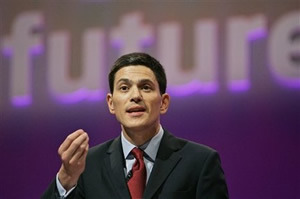 Labour leadership candidate David Miliband set out his vision of a “genuinely comprehensive education” at a school in Bristol today, speaking of his “brazenly aspirational” goal of inspiring a love of learning in children. He called for a “mature debate” on reforms to 14-19 education, questioning the “obstacle course” of GCSEs, AS and A level exams – “over-testing of a deadening variety” – and called for three-quarters of teachers to come from the top quarter of graduates.

The shadow foreign secretary also defended the previous government’s 50 per cent participation target for higher education and criticised the Coaltion’s opposition to it, pointing out that this level was already being achieved “by some of the most dynamic economies in the world”, including Finland, South Korea, Australia and New Zealand, with the United States committed to having the highest proportion of university graduates in the world by 2020.

“I want to start with the issue that is most important to me: education, its purpose, its focus, its principles. I say most important, because after the accident of birth, over which government has no say, education is the most powerful way in which life chances are shaped, and it is an area over which Government has greatest power…

“My vision is of a society where children of all family backgrounds do get equal opportunities; but it has to be more than that.  I want more than the opportunity to be unequal, more than a fair race to be the next Stephen Hawking.

“I am with Yeats: ‘Education is not the filling of the pail but the lighting of a fire,’ a fire of confidence and inquiry that needs to sweep across society with ever greater intensity, and is reflected in higher standards across the board. Far from watering down our aspirations, I think we should be scaling them up – in schools, colleges and in higher education.”

On school standards, he rejected “utterly and absolutely” the ‘more means less’ mantra of traditionalists, defended Labour’s record and called on the schools secretary to do more to tackle unfairness in school funding:

“England is well above average compared to our competitor nations in English at the end of primary school and Maths in years 6 and 9. We are just off the top of the table in Science in year 9.  In education, as in health, 13 years of Labour government brought Britain back into the European mainstream.

“41,000 more teachers, 120,000 more teaching assistants, every school a specialist school to drive up quality, the number of seriously underperforming secondary schools cut dramatically from 1600 to 260, staying-on rates improved at 16, and far more young people going on to university and further education.

“Investment was significant and sustained, including over £6 billion a year invested in buildings, but so was reform – in respect of new ways of working, bringing in new practices and providers, tackling chronic failure, promoting strong leadership.  And the poorest schools with the poorest children showed the fastest improvement.”

“The Government Academies Bill has a different purpose – to extend the academy model to existing successful schools. Recent analysis by Ofsted shows these schools teach 40 per cent fewer poor pupils than the national average; the existing Academies have nearly three times as many.

“I note with particular concern that despite the coalition’s rhetoric of fairness, Michael Gove won’t even agree to put in the Academies Bill provisions which would require funding to be fair between different categories of school, or which would require successful new Academies to support less successful schools. This needs to be a matter of law not grace and favour.“

Describing teachers as “the bedrock of quality”, he said there should be more accountability in the profession and that more should be done to  encourage teachers to take up posts in challenging schools and in harder to recruit subjects; he said the curriculum forced too many high achievers to specialise “too early and too narrowly” and called for a debate about the future of GCSEs; and he said Britain, far from reducing university places, should be aiming for 60 per cent participation rates “if we want to compete with the world’s biggest economies”.

He concluded by saying:

“The two golden tests for policy are simple: do they raise standards and do they narrow the social class achievement gap? I feel passionately about these goals because I was brought up to believe they are achievable.  Both my parents were teachers.  Fundamental to my upbringing was the idea that there is so much we do not know, but so much reason to try and find out. That is the optimistic spirit of enquiry that needs to drive our education system.”