At PMQs, David Cameron defended his marriage tax policy, once described by Justice Secretary Ken Clarke as "social engineering". His arguments were shaky at best. 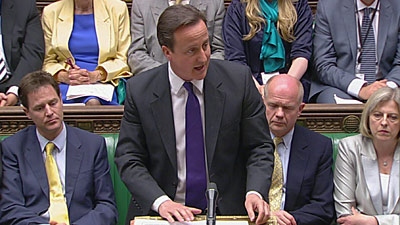 At Prime Minister’s Questions today, David Cameron defended his marriage tax policy, once described by Justice Secretary Ken Clarke as “social engineering“. Cameron’s argument was all over the place as his focus shifted from the tax code of other countries, comparisons with other forms of Government support, the causes of Government deficit, and Labour’s record of recognising marriage in the tax system. On each area he is on shaky ground.

First, as the Dr Patrick Nolan of the right-wing Reform think tank has written for Conservative Home:

“This claim that the UK largely stands alone among industrialised countries in not recognising marriage is quite simply wrong.

“There are a host of other countries that make no recognition of marriage in their tax systems at all, including New Zealand, Sweden, Finland, Greece and Hungary. Since the 1970s the clear direction of travel in tax systems has been to move away from family taxation. In relation to income taxes, for example, in 1970 it was possible to assess income taxes on a family basis in two thirds OECD countries, but in the 21th Century this has (quite rightly) fallen to around a third (and is continuing to fall).”

Second, comparing the £550 million cost of the Tory’s tax policy with the minimal costs of tax breaks for “Christmas parties and parking your bicycle at work” is simply absurd. Third, the Institute for Fiscal Studies published research before the election showing that “encouraging parents to marry [is] unlikely to lead to significant improvements in young children’s outcomes”. As Left Foot Forward documented before the election, the outcome gaps in cognitive development between children born to married and cohabiting parents are relatively small compared with the outcome gaps associated with a range of other factors.  The finding is consistent with a recent paper by Ruth Lister and Fran Bennett for Renewal, which concluded:

“As a number of commentators have pointed out, it is not possible to conclude from the statistics that marriage itself causes the positive outcomes associated with it and that therefore the stability of a society is a function of the support given to the institution of marriage. In particular, social scientists suggest that the stability associated with marriage can be attributed to the kind of people who choose to get married or to cohabit and to the values that they hold.”

Finally, Labour’s decision in 2007 to allow inheritance tax allowances to be transferable between married couples and civil partners remains contentious with many on the left but marriage was already recognised in the inheritance tax system. This is completely different from introducing a new (and expensive) tax break.

Mr Cameron did not explain why his policy discriminates against lone parents and widows, excludes 11.6 million married people where both husband and wife work, and does nothing for the roughly 600,000 married couples of working age who do not earn over the £6,555 tax threshold.