Electoral reform is not just about electoral fairness – there are wider political and social implications; income inequality is now at its greatest since 1945. 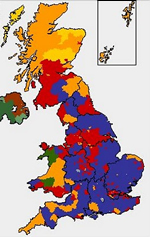 As a volatile and unpredictable election campaign enters its final stages, all the uncertainty might induce a touch of political vertigo among even the most seasoned political observer. It’s nothing a visit to the bookmakers shouldn’t cure; Ladbrookes are offering odds of 1/500 on Labour winning in a host of individual constituency contests from Barnsley East to Glasgow North East.

The quoted odds on Labour winning in a clutch of ultra-safe Labour seats, which would yield 80p on a £400 bet, are a useful reminder that, even in the midst of political upheaval, Britain’s electoral geography remains remarkably static. For decades, the colour-coded maps of constituencies in Great Britain have looked much the same. Even landmark elections like 1983 can be as notable for the seats which do not change hands as for those which do.

Nobody understands the static nature of UK electoral geography better than the political parties. Like the bookies, the parties know a one-horse race when they see one. In 2005, the four candidates contesting Barnsley East and Mexborough spent just £5,128 between them – equivalent to 8p per elector. With none of the candidates spending more than 25 per cent of the permitted maximum, a deeply under-whelmed local electorate responded rationally – 51 per cent of voters did not vote at all. Most of the rest voted Labour.

In Falmouth and Camborne, a three-way Cornish marginal, the voters had a rather different experience. Won by the Liberal Democrats in 2005, with a 34.9 per cent share of the vote, the combined spending of all nine candidates at the election was £46,361 – amounting to 65p per elector. The candidates from each of the three main parties spent at least 95 per cent of the maximum permitted and Falmouth’s electorate responded accordingly. The 67.1 per cent turnout was significantly above the national average of 61 per cent in 2005.

In monetary terms, then, the voters of Falmouth and Camborne in 2005 appeared to be worth eight times more to the political parties than the voters of Barnsley East and Mexborough. The campaign expenditure of the UKIP candidate in Falmouth alone was more than the combined total spent by the three main parties in Barnsley East.

In 2005, there were 156 seats (one quarter of the total) in which total candidate spend per elector was 23p or below. Of these 156 seats, none changed hands, and every single one returned either a Labour or a Conservative MP. Turnout in these seats averaged just over 55 per cent.

By contrast, dynamic party competition (on the UK mainland) in 2005 was most evident in the 41 seats where candidate spending per elector was 49p or above. In these seats, turnout averaged 63.4 per cent, one third of seats changed hands, and 42 per cent of the seats were won by candidates representing parties other than Labour or the Conservatives.

As the party leaders engage in their frenzied tours of key marginals, it needs to be recognised that, while it may be rational, the political parties reinforce political inequality by directing their campaigns at a tiny fraction of the electorate in the marginals, and allowing safe seats to become virtually ‘campaign free zones’. 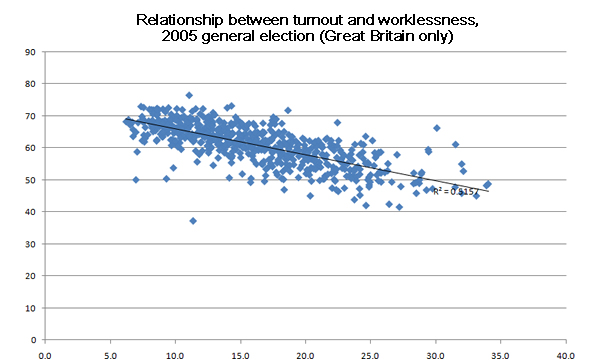 But the concerns do not end there. There is also growing evidence of a direct relationship between political and socio-economic inequalities. As the figure above shows, turnouts of 70 per cent or more in 2005 were heavily concentrated in areas with lower levels of worklessness, with turnout tending to fall as worklessness rises. The majority of seats with turnouts below 50 per cent in 2005 were those in which 25 per cent or more of the working age population depended on social benefits (compared to a national average of 16 per cent).

Electoral reform is not just about electoral fairness – there are wider political and social implications. Income inequality in the UK has now grown to the point that it is greater than at any time in the post-war period. Any attempt to reverse this trend is likely to fail while we retain an electoral system which has progressively eroded the political influence of those on the lowest incomes.

• Democratic Audit’s General Election Briefing, “A tale of two electorates – why some voters are more equal than others”, can be downloaded here.