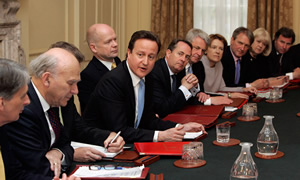 Just days into the new coalition, Tory MPs have expressed doubts over electoral reform, Europe and constitutional change. Today’s Independent reports that “Although the first meeting of the Cabinet was good humoured, reality dawned with appeals for any differences between the two partners to be kept private… Lord Heseltine, the Tory former Deputy Prime Minister, said the inevitable public spending cuts would cause ‘terrible strains’ between the two coalition parties and within them… [and] Tory MPs questioned the plan for the coalition to last for five years and doubted it would survive until the next general election.”

Ian Liddell-Grainger, Tory MP for Bridgwater, told the Indy that he had “never trusted the Lib Dems”, saying “electoral reform means hung parliaments, and MPs that you neither know nor see”. Several Tory MPs said they “did not trust” the Lib Dems on Europe, while several more expressed severe unease over the Tory plans to raise the threshold for dissolution of parliament from a simple majority of 50% of MPs + 1 to a weighted majority of 55% of all MPs, an issue Left Foot Forward debated yesterday. Charles Walker, MP for Broxbourne, said: “It is for Parliament to decide when it has lost confidence in a government… That is skewing the playing field. This would be the loss of an enormous check.”

Child benefit is on a “hit list” of Tory-Lib Dem cuts as the new coalition begins to sharpen the axe, reports The Guardian. The targeting of child benefit payments to the middle classes are among proposals being presented to the new Treasury team, as it emerged that “new policy commitments in the coalition agreement may have added up to £10bn to the government’s spending bill”. The Lib-Con coalition also announced that that the Olympics budget might not be protected and that all non-ring fenced departments – all departments other than health and international development – were facing cuts of “more than 15%”. The Guardian also reports plans by the new government for “a VAT hike to 20%”, which Left Foot Forward explored yesterday. The new rate “could cost every household in Britain £425”. Analysts estimate that “in real terms the hike would add 2.1% to the price of everyday goods, increasing the cost of petrol by 3p per litre, cigarettes by 12p per pack, and a pint of lager by 7p on average”.

Fresh questions have been raised over the new foreign secretary William Hague’s links to Lord Ashcroft, after the emergence of photos showing Ascroft attending official opposition meetings with overseas ministers. Hague and Ashcroft “are shown sitting across a table from Bosnia’s deputy foreign minister where they discussed possible policy options for a future Conservative government” reports The Guardian, which adds: “Inquiries have also established that Ashcroft, the Conservative party’s deputy chairman, has accompanied Hague to at least 12 countries or British territories including Pakistan, China and the US on official shadow foreign secretary business since 2005.” David Miliband, Hague’s predecessor and Labour leadership contender, called for answers. He said: “I have written to William Hague six times asking him to assure me and the British people that Lord Ashcroft was not piggybacking on trips arranged by the shadow foreign secretary for his own purposes… These unanswered questions were important before the election and they remain so now. If the Tories really want to practise the new politics they need to face up to the truth about their old politics.” The report adds: “A spokesman for Hague declined to comment. A spokesman for Ashcroft declined to comment… Ashcroft’s spokesman confirmed that the peer had resigned as deputy chairman of the Conservative party in the last few days.”

The Telegraph reports the latest news from the Labour leadership race, which “appears likely to pit brother against brother”, though David Miliband insisted that “brotherly love” would triumph over sibling rivalry, though it would cause the Milibands’ mother to view the contest with “a mixture of pride and head-scratching”. He said: “Brotherly love is more important than politics… We have talked very frankly and openly to each other because we love each other as brothers. The most important thing for both of us is that the family remains strong – and I’m absolutely confident that’s going to happen, whatever my brother decides.” Ed Balls, meanwhile, has said would take time and speak to supporters before deciding whether he would run, saying: “I don’t want to jump to any quick conclusions… There’s got to be a proper debate, people want a proper debate and I’m going to take that very seriously.” Andy Burnham, the former health secretary, said: “Everybody needs to take a breath,” while Jack Straw, outgoing justice secretary, confirmed that he would not be standing.

Looking overseas, and The Guardian reports that the Deepwater Horizon oil leak could be “12 times more powerful” than first thought. Early estimates indicated a flow of 5,000 barrels a day, a figure which could have risen to as much as 70,000 barrels a day – the equivalent of an Exxon Valdez disaster every four days. The analysis, conducted by Steve Werely, an associate professor at Purdue University, “was accurate to 20%; that puts the range of the oil spill from 56,000 to 84,000 barrels a day,” explains the report. Professor Werely told The Guardian that: “You can see in the video lots of swirls and vortices pumping out of the end of the pipe, and I used a computer code to track those swirls and come up with the speed at which the oils is shooting out of the pipe… From there it is a very simple calculation to figure out what is the volume flow.” However, a BP spokesman insisted: “We have said from the begining there is no way to estimate the flow coming out of the pipe… Our estimate was provided by the coast guard and Noaa (the ocean and atmospheric agency) and it is based on satellite imagery, overflight observations, and on water observations.”