As David Cameron announces his final ministerial line-up, one must ask: Where are all the women? 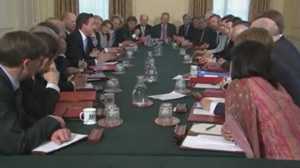 As David Cameron announces his final ministerial line-up, I have found myself asking the same question as during the latter months of Gordon Brown’s premiership: Where are all the women? Not much more than a year ago, David Cameron had said:

“If elected, by the end of our first Parliament I want a third of all my ministers to be female.”

His four female cabinet ministers are a start, but only represent only 14 per cent of ministers allowed to attend cabinet, and their positions are lower than their male counterparts, with the exception of home secretary Theresa May. In recent elections, record numbers of women stood as parliamentary candidates: rising from 8% in 1979 to 21% in 2010. According to the Centre for Women and Equality:

• The Green Party had the highest percentage of women candidates (33%) followed by Labour (30%), the Conservative Party (24%) and the Liberal Democrats (21%).

• We now have 142 female MPs sitting in the commons.

• Women representing the main three parties include: 81 for the Labour Party (dropping from the 101 elected in 1997), 48 for the Conservative Party, and seven for the Liberal Democrats.

Throughout their election campaign, the Conservative Party offered us a binding contract for all sorts of manifesto commitments, saying:

“If we do not deliver on our side of the bargain, then vote us out in five years time.”

The contract calls for a closing of the gender pay gap (currently at 16.4%), family-friendly and flexible working policies, ending violence against women and an increase in the number of women in enterprise.

They also promised that:

“A Conservative government would bring change to Britain’s corporate boardrooms, introducing new rules to increase the proportion of female directors, and creating new opportunities for women to rise to the top.

So with 55 women to choose from in this coalition government, David Cameron has chosen just four women to represent half of those living in the UK. With their promise of 50 per cent of candidates in FTSE 100 directorship positions to be female, it is a wonder why only four women sit in the cabinet: the directorship of the country?