There is a progressive majority in the UK. But a parliamentary coalition requires the support of small parties. What will the Green party choose to do? 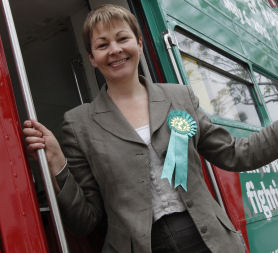 Dr Rupert Read is a Green party councillor in Norwich

But there are very serious problems. One is that both Labour and the Lib Dems are wounded. Labour, for getting only 150,000 more votes than Michael Foot; the Lib Dems for losing five seats and not getting the vote-surge that everyone was expecting. This makes it hard to feel any momentum behind the possibility of a Lib/Lab or a rainbow coalition (and it is the latter, with the immense complexities it would bring, that would be required in order to marshal an actual majority).

Another large problem is the political identity of the Lib Dems. Are they really ‘progressive’? As I write, the LibDems are in negotiation with the Tories. The Lib Dems have been dominated for some years now by the “Orange book” free-marketeers . In particular by David Laws, Vince Cable, Chris Huhne, and Nick “Savage-Cuts” Clegg himself. This is threatening to tear the LibDems apart as shown by thesecomments from Lib Dem Voice, the leading Lib Dem grassroots website, and the summary of views on Left Foot Forward yesterday.

It is pretty clear that many grassroots Lib Dems are alienated even by the talks, let alone by the prospect of an actual deal with the Conservatives. They are light-years from the happy neoliberalism shared by parliamentary Liberal Democrats and the Tories. If, in light of Gordon Brown’s offer of real electoral reform, Nick Clegg does decide to talk to Labour as well, the negotiators will have to address what to do with some or all of the Alliance, the SDLP, the SNP, Plaid Cymru, and the Greens.

Which brings me to my question: How should and how will my Party, the Green Party, react?

The answer is pretty clear. Our leader and first Member of Parliament Caroline Lucas said it herself in her first interview with Jeremy Paxman, just after being elected. The Green Party will not enter into any coalition. If we were to be involved in a rainbow government of the progressive majority, it would be on the basis of ‘Confidence and Supply’ as has taken place in recent years with Green MSPs and the SNP minority government in Scotland. In such a circumstance, the Green Party would focus on ensuring that some of our core issues – such as green investment (rather than cuts) as the answer to the ongoing risk of a Depression, and major constitutional and political reform (including proportional representation) – were taken seriously by such a government.

As outlined above, Labour and the Lib Dems alone don’t have the numbers, momentum, or legitimacy alone. By contrast, the entry of the Green Party (and the Alliance Party) into Westminster provides, in a small but nevertheless significant way, a sign of life. Our addition is something healthy and new, and a basis on which to face down the Tories and the Unionists and say that they do not represent an insurgent majority.

A rainbow progressive majority administration – presumably a Lib-Lab coalition, with a ‘Confidence and Supply’ arrangement with the smaller Parties including the Greens – might just work.

18 Responses to “A rainbow coalition? The role of the Green party”