The proportion of MPs that went to private school is five times that of the population as a whole - an increase from the last parliament. 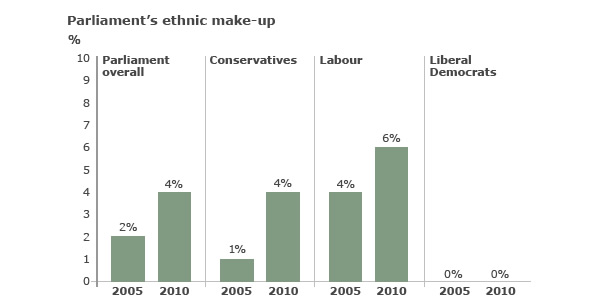 A new report out yesterday, published by the Sutton Trust, shows that 35 per cent of MPs elected last week were privately educated; the figure for the 2005 intake was 32 per cent, and for the general public it is just 7 per cent.

In terms of ethnic minority representation, the Liberal Democrats still don’t have a single non-white MP; there are 15 Labour and 11 Conservative – an increase of nine, including the first ever black woman and first asian woman to be Tory MPs. Last week also saw the election of the first female Muslim MPs, Labour’s Yasmin Qureshi (Bolton South East), Shabana Mahmood (Birmingham Ladywood) and Rushanara Ali (Bethnal Green and Bow).

The number of female Tory MPs increased from 18 to 48, with the figure for Labour falling from 94 to 81 – though rising as a proportion from 27 per cent to 31 per cent – and the Liberal Democrats’ figure down from nine to seven. The small overall rise, however, was described as “derisory” by the Centre for Women & Democracy.

“Although there has been a small increase in the number of women MPs at this election, it can only be described as derisory, and the next parliament needs to take clear action to ensure that we do not find ourselves in this situation again.

“We are well behind the majority of other European countries in this regard, and at the present rate of progress it will take decades – if not centuries – before women are properly represented in our democracy.”

In March, The Guardian had reported that:

“Evidence from the Equality and Human Rights Commission has shown that the movement of women into positions of power and influence has reversed or stalled. It likened women’s progress to a snail’s pace and said it would take a snail 73 years to crawl from Land’s End to John O’Groats and halfway back again before the numbers of women becoming directors of FTSE 100 companies was the same as men.

“The snail would have to cross the length of the Great Wall of China in 212 years before women would be equally represented in parliament.”