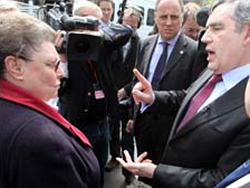 With polling day just a week away, there’s only one story dominating the morning’s papers, the prime minister’s encounter with Mrs Duffy. The right-wing press go into overdrive, the Mail talking about “censorship” of “any debate” on immigration and “contempt” for “millions of voters”; The Sun described Gordon Brown’s election hopes as “toast”; the Telegraph says the gaffe “may cost him the election”; and The Times says the blunder “plunges Labour into crisis”. There is more considered reaction from The Guardian, where Andrew Rawnsley writes: “Wearing two faces is not, of course, a hypocrisy unique to Brown.

“I’d wager a decent sum that both David Cameron and Nick Clegg have blown off to aides after awkward encounters with voters. They just haven’t been caught at it.” In The Independent, Steve Richards asks why Brown made his blunder, and explores the pressure leaders are under: “Elections are based on an illusion that political leaders like and respect every single voter they meet. Voters are allowed to harangue leaders, but never the other way around… Goodness knows what is going on in Brown’s exhausted mind when he makes these wholly misjudged, angry exclamations… The most dangerous element of this sequence for Labour was Ms Duffy’s parting words. She declared that she was not planning to vote Labour at the election. Of all the moods whirling around this election the anti-Labour one is strongest… The real danger for Labour is not what Gordon Brown said to Gillian Duffy, but what she said to him. Fairly or not, Gillian Duffy speaks for many voters.”

In the wake of the story, many reports suggest evidence that the right-wing media will stop at nothing to parachute David Cameron into Downing Street, BBC Breakfast reporting that The Sun offered Mrs Duffy money and interviewed her – and tried to entice her into endorsing the opposition; she didn’t, no front-page splash ensued. This follows The Sun’s spiking of a poll showing support for the Lib Dems. Last night the Next Left blog had a post titled “Want to say you’ve been let down by Labour? Get some cash from The Sun” which reported how “The Sun’s political editor has been reported saying ‘It is my job to see that Cameron fucking well gets into Downing Street'”. Left Foot Forward last night reported that, if the stories about The Sun tapping up Mrs Dufffy were true, “it would be in keeping with other recent rumours of the tabloid’s spending pattern”. And The Guardian carries an article by John Prescott, in which he says the bigot ‘gaffe’ “is nothing but a Murdoch plot… Make no mistake, Gordon Brown was mugged – by a politically partisan media empire with no qualms about breaching privacy”.

All eyes now shift from Rochdale to Birmingham, and the third and final leaders’ debate, on the most important issue of all, the economy. Nick Watt in The Guardian says it will be Nick Clegg who faces the most pressure, facing his “toughest test” tonight, the Liberal Democrat leader “anxious to maintain his bounce”. The report says: “A third strong performance will help Clegg to intensify the Lib Dem squeeze on David Cameron and allow him to exploit Gordon Brown’s woes after yesterday’s ‘[email protected] row. A less assured performance could see Cameron, who was given an eight-point lead over the Lib Dems in one poll yesterday, finally securing a decisive breakthrough a week before polling day… A Populus poll in the Times put them in second place on 28%, down three points, eight points behind the Tories who were on 36%, up four points. Labour was in third place on 27%, down one point. But a YouGov poll in the Sun showed a much tighter picture. The Tories were unchanged in first place on 33%. Labour was second on 29%, up one point. The Lib Dems were in third place on 28%, down one point.” The Standard says the debate represents an instant opportunity for the pm to move on from the “bigot” row: “Gordon Brown will attempt to lift himself for the third and final prime ministerial debate after offering a grovelling apology for branding a pensioner “bigoted”. With just a week left until the General Election and polls showing the parties still deadlocked, Labour strategists have been billing Thursday evening’s economy-themed clash as an opportunity for the Prime Minister to turn the tide of the campaign.”

The main news outside of the campaign is the Eurozone financial crisis which has spread from Greece to Spain. The Financial Times reports that fears “intensified” as Spain suffered a downgrade in its credit rating from AA+ to AA, following the downgrading to junk status of Greece. The Guardian reports German Chancellor Angela Merkel’s comments that Greece should not have joined the Euro: “In 2000 we had a situation when we were confronted with the question of whether Greece should be able to join the eurozone… It turned out that the decision [in favour] may not have been scrutinised closely enough.” Head of the OECD Angel Gurría added: “This is like ebola. When you realise you have it you have to cut your leg off in order to survive.” The Telegraph reports on the warnings for Britain: “Economists fear that events in Spain show that financial “contagion” is spreading from Greece, as investors are scared off investing in any European country with significant government deficits… Britain’s government deficit this year will be bigger than that of either Greece or Spain, and some City analysts believe the UK’s AAA credit rating could be cut, driving up interest rates and raising the prospect of Britain being bailed out by the International Monetary Fund.”

And The Independent reports that “eco-friendly” products may not be “as green as they appear”. It reports that supermarket chains and manufacturers “may be exaggerating some of their claims” for “eco” cleaners and washing powders: “While all the products made by the likes of Ecover, Green Force and Tesco did some good for the planet, almost half of them made claims that seemed not to be justified… While they [Which? consumer magazine] gave a thumbs-up to disposable nappies and wipes made by Sainsbury’s, Asda, Earth Friendly and others, they disputed some of the claims made for laundry tablets and, especially, lavatory cleaners… Some of Tesco’s claims for its Naturally lavatory cleaner ‘lacked evidence’ – particularly the claim that it contained no phosphates and left no chemical residues, since, the panel pointed out, this did not apply to normal cleaners either.” In response, Tesco agreed to remove some of its claims.