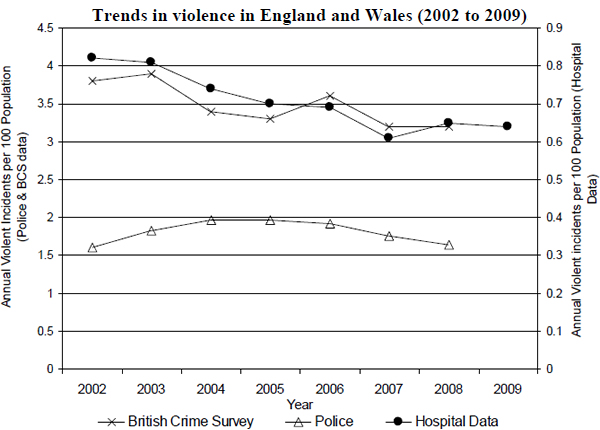 Shadow home secretary Chris Grayling – slapped down by David Cameron this week for his homophobic remarks on gay couples staying in B&Bs (for which he only regrets “causing confusion”) – today stands accused of once again misleading the public over violent crime statistics.

During yesterday’s Daily Politics Home Secretary’s Debate Grayling again insisted violent crime was up, ignoring the findings of the British Crime Survey, as yet another report, out today, shows violent crime is down.

The graph below shows that, with the exception of one year’s A&E data and one year’s BCS data, all three measures show violent crime has decreased year-on-year during the last parliament:

Grayling has repeatedly failed to accept the findings of the British Crime Survey, which shows violent crime down 41 per cent since 1997, and all crime down by more than a third. In February, the Conservative Party was strongly criticised by the chair of the UK Statistics Authority for distributing leaflets claiming there had been a “98 per cent increase in serious violent crime”.

28 Responses to “New evidence violent crime is down”