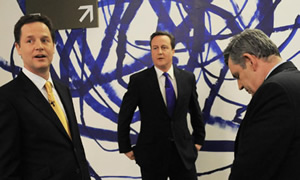 • Once again the leaders’ debate dominated the week’s politics; all eyes were on Bristol last night as Messieurs Brown, Cameron and Clegg squared up (and I mean squared up) to debate Europe, climate change, tax, nuclear weapons, sleaze, Afghanistan, and immigration. There were fewer anecdotes, fewer “I agree with Nick”‘s, more sparring and less love-bombing.

The audience was much lower than for last week’s ITV debate, only 4 million compared to 9.4 million. The post-debate skirmishes were dominated by David Cameron’s squeals of indignation about supposed Labour “smears” and “pure lies” in election leaflets. He said it was “disgraceful to try and frighten people”. Not that the Tories would ever seek to frighten people…

Well, apart from Ken Clarke, who said a hung parliament risked the IMF being called in – a claim demolished by Varun Chandra on Left Foot Forward today. Or for that matter the legion of Tory candidates some of whose scaremongering, dog whistle literature you can see here.

• The past week also saw the wave of Cleggmania continue apace, the Liberal Democrat leader maintaining his personal popularity despite the onslaught of the nasty press; if anything, their all out attack on him yesterday may even have boosted his popularity.

The army top brass also joined in the praise for the Lib Dem leader. Four senior military leaders, writing in Wednesday’s Times, said that it was “of deep concern that the question of the Trident replacement programme is at present excluded from [a comprehensive strategic defence review after the election]”, adding “should the review determine that there is still a need for a nuclear deterrent, a number of options may be more affordable than a like-for-like replacement of the Trident system, which has been described as a ‘Rolls-Royce’ solution”.

• The main story outside of the election was the grounding of aircraft caused by the ash cloud arising from the Eyjafjallajökull volcano, pronounced “AY-uh-fyat-luh-YOE-kuutl-uh”. Britain’s airports reopened for business on Tuesday evening, with the government accused both of caving in to the airline industry and opening up too soon, and on the other hand needlessly closing up for six days.

The disruption was estimated to have cost the economy more than £1.6 billion, leaving 500,000 passengers stranded and airlines facing financial ruin. The transport secretary Lord Adonis insisted the ban was necessary: “Safety remains my paramount concern. Since the flight restrictions were imposed, the Civil Aviation Authority has been working around the clock with the aircraft manufacturing industry, the airlines and the research community to better understand how different concentrations of ash affect aircraft engines.”

Boris Johnson, however, questioned the science, saying: “What I would really like to know is whether we are absolutely certain that the initial decision taken to close down UK aviation at this level of risk was correct.” Who do you trust, Boris or the scientists?!

Lord Mandelson, who crossed the party divide to defend Nick Clegg against the onslaught of the right wing press yesterday. Mandelson, who knows a thing or two about the “dark arts”, such as they are, described the attacks on Clegg as coming “straight out of the Tory party dirty tricks manual”, adding that it was “pure Andy Coulson style News of the World territory turned into political form… I think it offends against basic decency, I think it violates the basic rules of electioneering in this country”.

In response the Tories, several of whom repeated the allegations against Clegg yet denied any involvement in pushing the stories out to the press, could only say that Mandelson was talking “complete nonsense”. That’s right, the Tories, rather than condemn the right wing newspapers, condemned Mandelson.

The aforementioned right wing press, for their assault on the character, family and integrity of Nick Clegg. The Mail on Sunday published a shocking article last weekend titled “The United Nations of Nick Clegg” which said: “His wife is Spanish, his mother Dutch, his father half-Russian and his spin doctor German. Is there ANYTHING British about LibDem leader?” The day before the Mail went all BNP in declaring: “Despite his Anglo-Saxon name, Nick Clegg is by blood the least British leader of a British political party”.

Then, of course, came the all out attack in yesterday’s papers, the Mail conjuring a  “Nazi slur on Britain”, the Express screaming about his “crazy immigration policy” and The Sun claiming he had “flip-flopped” on Afghanistan. And this morning, news of the Murdoch mafia marching into the Independent’s offices and demanding they respect their authoritah. The Mirror takes up the story:

“The wild-eyed duo then started to harangue bemused editor Simon Kelner in a foul-mouthed tirade. Murdoch Jnr, 37, who runs Sky TV and his dad’s right-wing papers The Sun and The Times, accused Kelner of “impugning our family name” and shouted: “you’re a f****** f***wit.” The crazed duo then threatened to “expose” the Independent’s owner, ex-KGB agent Alexander Lebedev.”

They must be rattled. As Next Left blogged yesterday, “Could it be Murdoch wot loses it?”

The statistics on crime, all of which – the British Crime Survey, police recorded crime (the Tories’ favoured measure), and accident & emergency admissions (cited by Chris Huhne during a BBC debate on Tuesday) – showed falls in violent crime, and a decrease in crime overall. The public perception of anti-social behaviour is also down, from 17 per cent in 2008 to 15 per cent in 2009.

Chris Grayling, the Tories’ weak link, homophobic excuse for a shadow home secretary, once again repeated his claims that violent crime was up, however, and failed to welcome the news of the fall in violent crime. Grayling is still refusing to produce evidence for his oft-repeated claim that violent crime is up 44 per cent under Labour; the true figure is a 41 per cent fall.

Once again, the leaders’ debate was the top trending item on twitter this week.

Here are some tweets from last night’s Sky News debate:

@PeterKenyon: Like emphasis on jobs from Brown in #Skydebate. Got a laugh about boys squabbling at bathtime reminder Cameron/Clegg

@matthias_muller: I wonder if people on buses and in cars will be happy to have #Skydebate in #Bristol..roads are gridlocked and worse than usual.

@SkyBet: #Skydebate Cameron 100/1 to get egg on his face during second election debate with Sky Bet http://bit.ly/bfcshM

7 Responses to “Look Left – The Week in Fast Forward”