The Liberal Democrats’ £3 billion green stimulus package has much to commend it. It shows they understand the need for a new, populist approach to climate issues. 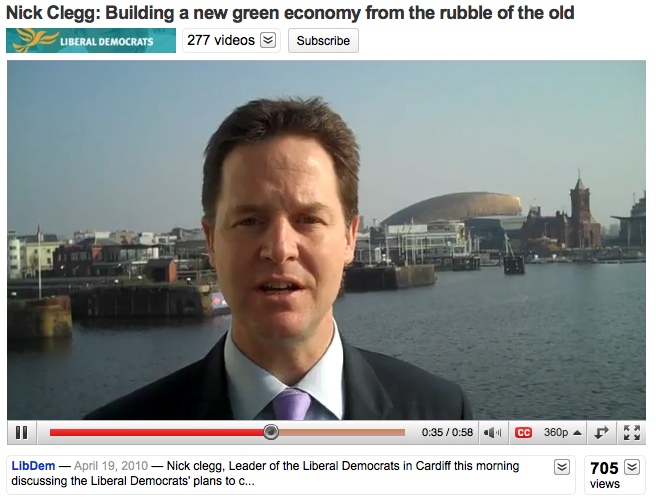 As progressives, we should welcome the Liberal Democrats’ plans for a £3 billion green stimulus package unveiled yesterday. Not just because of the specific measures within it, but also because it shows they understand the need for a new, populist approach to energy and climate issues.

To be sure, there’s plenty to be excited about among the measures including:

• tackling the housing shortage by bringing 250,000 currently derelict homes back into use.

• £400 million for insulating schools (ensuring that in the longer term, education funding is spent on education rather than on inefficient old buildings); and

• an intriguing £400 ‘eco-cash back’ scheme for homeowners to spend on energy efficiency and micro-generation projects.

That said, their claim that the £3.1 billion needed to fund all this can be found through “savings” is likely to raise plenty of eyebrows. We’ve all heard the Tories explaining away new spending commitments (such as their marriage bribe) in similar terms over the past few months, and the public are right to be sceptical of just how much can be squeezed without causing real damage.

Given Nick Clegg’s rise and rise since last week’s debate, we can expect these supposed savings to come under much more scrutiny than they would have just weeks ago. In order to defend them, the party would do well to arm itself with more detailed arguments about how a low-carbon economy would not only make us greener, but stronger and more competitive in the longer-term too. Otherwise, it risks being dismissed as an altruistic luxury that we simply can’t afford.

The language used by Clegg and Simon Hughes is definitely encouraging though. We’ve heard similar plans for green jobs, low-carbon development areas and financial incentives for home insulation from both Brown and Cameron already. What’s been missing is the big vision tying it altogether, with both men making the announcement as one policy among many.

No wonder the public are confused by the chasm between the science, rhetoric, and sense of political urgency around climate change. What’s needed is a narrative which demolishes that false dichotomy between the environment and economy and which connects global issues of climate and energy with the stuff of everyday lives. Too often the climate rhetoric is bogged down in the language of threat and sacrifice and ignores the opportunity for Britain to lead the world in the creation of a clean, efficient, technologically-led economy fit for the 21st century.

In spelling out an ambitious vision which addresses the “triple crunch” of climate, energy and the economy as an inseparable whole and as an opportunity as well as a threat, the Liberal Democrats’ stimulus package suggests that they might just ‘get it’. Clegg’s claim that the question of “building a new economy from the rubble of the old” represents the “most important issue of all” is a startling one to make during an election dominated by squabbles over how best to manage national decline.

The argument that in the past “economic policy was made entirely subservient to the needs of just one square mile – the city of London” hints as a new age of modern economic regeneration based around Britain actually producing things again, rather than relying solely on being the World’s casino.

That’s a proposition which appeals to all progressives, far beyond those particularly concerned about rainforests and polar bears. It’s also a message of aspiration, hope and positivity which also offers a way forward for a climate movement looking for new direction after a period of scientific slander and disaster in Copenhagen.

The past week has shown that the electorate are looking for a Roosevelt, not a Hoover. By addressing issues as diverse as climate change, energy, jobs, and the bankers’ stranglehold over our economy, the narrative around green economic revival offers real optimism that progressives can rally around. Let’s see if the Liberal Democrats have the courage to stick with it.