Over the last fortnight tens of thousands of people have contacted their MPs opposing the Government's plans to “fast-track” the Digital Economy Bill into law. 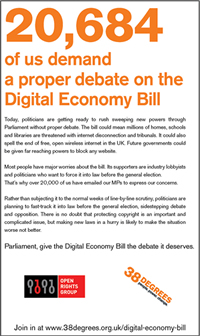 A digital uprising will spill over into Parliament today. Over the last fortnight tens of thousands of people across the UK have contacted their MPs opposing the Government’s plans to “fast-track” the controversial Digital Economy Bill into law. Facebook and Twitter have been the focus of a people-powered outcry that has seen more than 22,000 letters sent to MPs and upwards of £20,000 raised to pay for newspaper and online adverts opposing the bill.

People-power is working. The Liberal Democrats caved in to this public pressure last week and withdrew support for the bill. More and more Labour and Conservative MPs are waking up to the huge public concern about the bill and raising concerns with their whips.

As Left Foot Forward has highlighted, there is plenty to be worried about in the bill. It could hand huge new powers to ministers, allow widespread internet disconnections, the blocking of entire websites, and spell the end of free, public WiFi. But the biggest worry is that politicians are planning to rush these sweeping new powers into law without a proper debate, without allowing opposition to be heard.

The bill has had its third reading in the Lords and if the Government, as expected, “fast tracks” it into law through wash-up it will be law before the general election.

Today 38 Degrees members will do all we can to make sure MPs realise just how many people think it’s a bad idea to rush sweeping new powers into law without proper debate. Thousands of us will be calling our MPs, urging them to do all they can to stop the bill being rushed into law.

The Government may be hoping that opposition to the bill gets drowned out by coverage of the General Election, but they might be wiser to remember that in a few weeks those opposing the bill will be making another big decision – who to vote for in the general election.